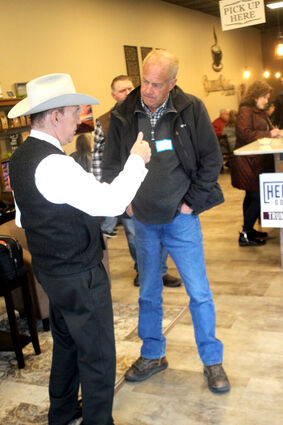 Herbster made another stop at Beans and Steams Coffee House in Sidney on Wednesday, March 30. In his visit, he said issues and candidates make this a critical election for the governor's race. Among the issues, he said, is the Critical Race Theory (CRT). He said governor's races will impact the states and the country. He said CRT has been in the state for several years. He added that another point of discussion is school funding. He said funding should follow the student, regardless of the school. He added parents should have the right to address the local school boards.

“If you're living in a country where you ask a school board a question and you're called a terrorist, we have a problem,” he said.

“We have to redo our taxes. Our tax code in Nebraska was written I think in 1967,” he said.

He shared a story of a friend who wanted to move a cattle ranch to Nebraska. He ended up purchasing a larger ranch in Oklahoma because the taxes were cheaper. He said the current property tax system will continue to drive people out of the state.

He said a governor will have two primary themes to follow: Be the state's biggest cheerleader, and have a backbone of steel to stand against Federal government overreach.

He said he is focused on being Nebraska's biggest cheerleader.

"I'm going to sell Nebraska like no other governor," he said.

Herbster said he will be a governor that will remember Sidney and western Nebraska.

“I'm a farmer. I'm a rancher. I'm going to be as transparent as possible,” he said.

Herbster added Nebraska has to be aware of who owns land in the state, and their influence on the state.

“We have to make sure not one acre of land is sold to China, or any other of our adversaries,” he said.

He said COVID was a planned attack, and that the state needs people who will fight for faith, family and freedom.

Herbster said he also stands for less taxes, and less regulations. He also talked about some of the national issues, comparing the aid sent to Ukraine with the value of the military supplies left behind in Afghanistan.

He said servicemen are trained to destroy equipment rather than surrender them. The supplies left behind are valued much higher than the aid sent to Ukraine, he added.

He said two weeks ago Congress passed a $1.5 trillion spending bill, including $30 billion in Ukraine aid. There is also a proposal for $400 payments to families for gas help. He calls it the beginning of socialism, which leads to communism.

“We have to hold onto the value system in our country,” he said.