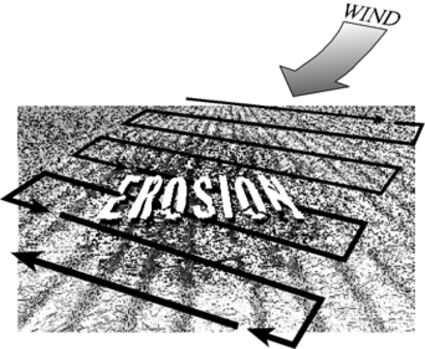 High winds lasting for multiple days combined with long-term dry conditions have created the “perfect storm” for soil erosion to develop across Nebraska.

The erosion is visible in moving and drifted soil (Fig 1) and should be controlled before more topsoil and crops are lost. Weak stands of wheat were significantly sandblasted and damaged by the windblown soil. (Fig 2 and 3) (Photos by John Thomas, Box Butte County)

The following emergency control methods are available to reduce damage from wind-induced soil erosion that already has started or is anticipated:

tillage to produce ridges and clods

and soil additives or spray-on adhesives

The choice of method, or combination of methods, depends on severity of erosion, soil type, soil moisture, type of crop, stage of crop growth, and equipment or materials available.

Tillage is commonly used for emergency wind erosion control, but it should be viewed as a last resort. It can be effective if done properly. The purpose of emergency tillage is to provide a rough, ridged, cloddy surface more resistant to wind erosion. Surface roughness reduces wind velocity at the soil surface and helps trap windblown soil particles. Emergency tillage is only a temporary measure because clods readily disintegrate.

When using emergency tillage in growing wheat, use an implement with narrow chisel or shovel point shanks placed 4-5 feet apart and drive perpendicular to the direction of the prevalent winds.

Where possible, use emergency tillage before soil blowing starts. Soil erodes more rapidly from abrasion by windblown soil particles than from wind that contains no soil particles. If erosion is anticipated because high winds are forecast, start emergency tillage on areas of the field most vulnerable to erosion before the wind reaches a critical speed.

If soil blowing already has started, begin emergency tillage on the upwind edge of the eroding area. Tillage in a direction perpendicular to the expected wind direction is most effective. An implement used for emergency wind erosion control should gently lift the soil, creating as many and as large of clods as possible. Disks and harrow-type implements with several ranks of closely spaced tines generally will not be effective and should not be used.

In fine- or medium-textured soils, most types of chisel, lister, or broad shovel points create a ridge and bring clods to the surface. Narrow points, 2 to 4 inches wide, require a shank spacing of about 24 inches for best results. Wider shovels or lister bottoms that create a larger ridge can be spaced 36 to 48 inches apart. Tillage depth to produce maximum roughness generally varies between 4 and 12 inches, depending on soil conditions.

If more than one emergency tillage operation is anticipated, use a shallow depth (4 to 6 inches) the first time. Follow with a deeper tillage the second time, with new furrows spaced between the original furrows.

In sandy soils it usually is best to anticipate emergency tillage will be required, and time the operation to obtain the best roughness. Clods readily form in sandy soil when the soil surface is moist and has been lightly compacted. Other operators prefer a soil ripper to bring up large, dry clods when subsurface soil is dry.

For sandy soils or other soils that don’t easily produce durable clods, spreading manure with a manure spreader in the same pattern as tillage is an option. There are a lot of feedlots across Nebraska and manure can be useful.

In planted wheat, emergency tillage can be used in a field planted to winter wheat. If wind erosion occurs, it is better to control the damage early using emergency tillage, rather than risk losing the entire crop. Use narrow chisel points spaced 4 to 6 feet apart, 4 to 6 inches deep. Tillage direction should be perpendicular or at an angle to the wheat row to minimize plant injury. Before beginning emergency tillage operations, producers should check with their crop insurance agent. Emergency tillage may also be necessary in other crops such as sugar beets, corn, and dry edible beans.

Data from studies in Kansas suggests this type of emergency tillage has minimal effect on potential yield but can reduce the damage to growing wheat and can reduce soil loss in moderate erosion situations.

This study found emergency tillage caused the most damage to wheat yields when the wheat had just emerged. The least yield reduction was found when the tillage was done in fields with wheat plants already tillered. Emergency tillage is not effective if clods cannot be brought to the surface.

Nebraska Extension educational programs abide with the nondiscrimination policies of the University of Nebraska–Lincoln and the United States Department of Agriculture.