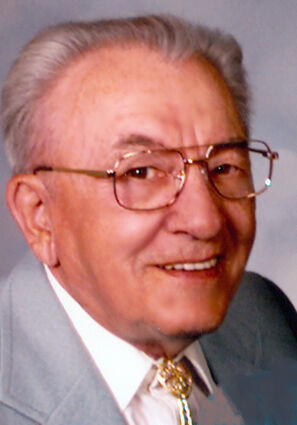 He was born November 17, 1928 in Norfolk, NE to Henry D and Emma (Wachter) Lienemann who farmed south of Randolph, Ne.  Gene graduated from Randolph High School in 1946. His mother died as the result of an accident in 1944 and his father died of colon cancer in 1947. As a result Gene farmed for two years and then went off to school as he had planned before his father’s illness.

Gene was working at a radio station in Sioux Falls, S. Dakota when the Korean conflict began and the South Dakota National Guard was activated. He became the Radar Section Chief of the unit that was deployed to Fort Richardson Alaska. At the end of his service he found employment with KSCJ in Sioux City Iowa until KSID came calling offering him a combination job as Chief Engineer and Chief Announcer. Gene got acquainted with the Wheatbelt Public Power District by repairing their two way radios evenings and weekends until a position became available that offered some interesting challenges. As a result he made the change and spent almost 40 years at the power district, the last 25 years as General Manager. In addition to serving on numerous Boards and Committees associated with the Rural Electric Association. He was active locally in activities associated with the Chamber of Commerce and Economic Development. He also spent several terms on the Board of WNCC including a number of years as chairman.

Gene is survived by the love of his life, his wife Margaret, sons Ron and Barry both of Rushville,

In addition to his parents he was also preceded by his son, Steven, his brother, Ron, his grandson Brian, and his nephew, Lowell.

Memorial services will be Thursday, May 19, 2022 at 2:00 p.m. at the First Presbyterian Church in Alliance.  Interment will be in the Nebraska Veterans Cemetery

Memorials may be made to Holy Trinity Church in Sidney, Veterans Cemetery Alliance, Veterans State Cemetery at Alliance Foundation or Panhandle Blocks Quilts of Valor Alliance. They may be sent in care of the family at 1125 Colorado Avenue, Alliance, NE  69301.

Online condolences may be left at http://www.batesgould.com with Bates-Gould Funeral Home in charge of arrangements.