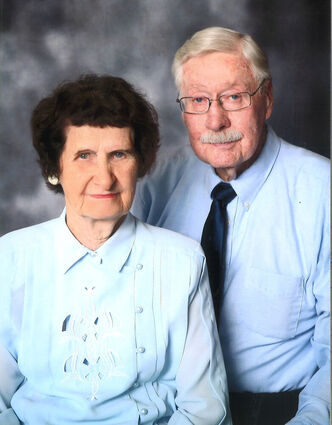 Ruth C. Fraass, age 90, passed away on January 14, 2022, and Glen D. Fraass, age 89 of on May 3, 2022. Memorial services for Ruth and Glenn will be held at 10:30 A.M. Friday, June 3, 2022 at the Gloria Dei Lutheran Church in Lodgepole, NE with Pastor Brenda Tophoj officiating. Inurnment will follow in the Pleasant View Cemetery in Lodgepole. Services will be recorded and available on our website for viewing. Friends may stop at the Gehrig-Stitt Chapel on Thursday, June 2, 2022 from 1-6:00 P.M. In lieu of flowers, memorials may be sent to Gloria Dei Lutheran Church. You may view Glenn and Ruth’s Book of Memories, leave condolences, photos and stories at http://www.gehrigstittchapel.com.

Gehrig-Stitt Chapel & Cremation Service, LLC is in charge of Glenn and Ruth’s care and funeral arrangements.

Ruth Christine Fraass was born in Spring City, TN on November 4, 1931, to Columbus and Nancy Ketchersid. After graduating from college in Berea, KY, Ruth came to Lodgepole and taught Home Economics, Science and P.E. for 5 years. She also managed the Chappell pool for two years. Ruth’s favorite things in life were teaching and gardening.

Glenn Dale Fraass was born in Lodgepole, NE on October 11, 1932. Glenn entered the Air Force in April 1952 and served four years as a Jet Engine Mechanic. After his technical training at Chanute AFB, IL, he served with the 43rd Bomber Wing, Strategic Air Command. Glenn left the Air Force in 1956 as an Airman First Class and was awarded the National Defense Service Medal and the Good Conduct Medal. He was a member of the American Legion and Lions Club. Glenn worked at the Coca Cola Company, a Parts Manager at Kripals and Postmaster. He enjoyed riding motorcycles and bikes.