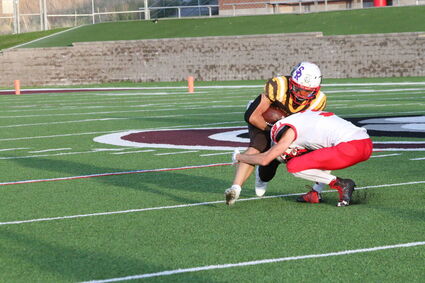 The annual Wyoming-Nebraska 6-Man Shoot Out All-Star game was played on Friday in Chadron, and the Wyoming squad was able to outlast the Nebraska team in the highest scoring contest of the 11-game series.

The game was a 16-to-16 tie until Wyoming scored with 12 seconds left in the first half. On Nebraska's final play of the half, Wyoming came up with an interception and runback for a touchdown to give the Wyoming All-Stars a 30-to-16 lead that they would not relinquish.

Nebraska pulled closer, narrowing the lead to 30-to-28 in the third quarter, but Wyoming was able to match the scoring plus more during the final quarter of the game, giving the Wyoming squad the 68-to-44 victory.

Potter-Dix's Thomas Muldoon was a defensive standout during the game, recording many tackles and pass disruptions. He also was used on kickoffs and as a receiver. Muldoon and Jared Anton were selected to represent Potter-Dix in the annual event, as well as Head Coach Dale Frerichs as an assistant for the Nebraska team.