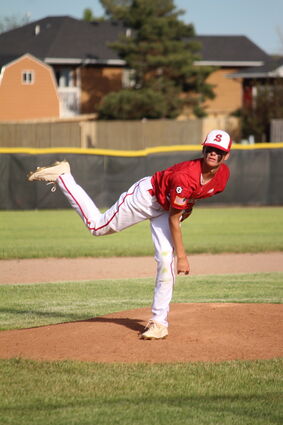 Sidney's American Legion Post 17 Senior baseball team had a tough week, starting with home contest against Bridgeport getting postponed by wild weather in the panhandle on Tuesday, and an extra-inning loss on the road against Gordon.

Late Tuesday, just prior to the start of the junior game, a ferocious storm front barreled through the Sidney area, with gusting winds, lightning, torrential rainfall and ping-pong sized hail that caused much damage throughout the county. The two contests against Bridgeport were postponed and will be made up at a later date.

Better weather came on Wednesday, and the Sidney teams hosted their rivals from Alliance for a junior/senior double header. After the Alliance Juniors were finished shutting out the Sidney Junior team 5-to-0, the Seniors took the field for the second game.

The Alliance team has dominated the games between the clubs so far this season, and were helped by Sidney pitchers who struggled to control their offerings. Micah Schneider started on the mound for Sidney, and the hard thrower had trouble controlling his pitches. Schneider walked six batters and hit five more while giving up seven runs on six hits over four innings.

The Sidney offense also struggled against Alliance again, only notching four hits and one run in the contest. Zech Roggasch had two of the four Sidney hits, going two-for-two at the plate for the Seniors. Alliance scored 14 runs on 12 hits, and scored in five of the six innings played. Alliance's Jakob Callan was the winning pitcher, firing off five innings while allowing just one run on four hits, striking out nine and walking two.

The Seniors tried to bounce back on Thursday, traveling to Gordon to face off against the Security First Regulators team. In this game, the Sidney Seniors got off to a hot start, plating two runs off of one hit to take an early lead. However, the Gordon team jumped on Sidney starter Blaine Russell for five runs in the bottom of the frame to take a 5-to-2 lead. But Russell found his groove, and hurled five scoreless innings while the Sidney team methodically closed the gap, scoring two runs in the second inning and another in the third to tie the game at 5-to-5. Sidney took the lead in the fourth inning on a Patrick McCartney sacrifice fly that scored Zech Roggasch from third base. 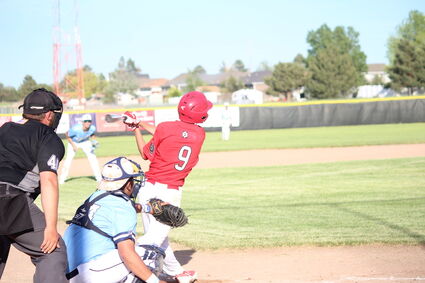 Russell kept up the pace and the Regulators off of the scoreboard, and the Sidney Seniors added another run in the sixth inning to take a 7-to-5 lead into the bottom of the seventh inning. However, Gordon's Tyler Johnson led the inning off with a single, then a passed ball and two Sidney errors allowed Gordon to tie the game at 7-to-7, forcing extra innings.

Neither team scored until the bottom of the tenth inning, when Jace Freeseman laced a single for Gordon, then two passed balls allowed Freeseman to score the winning run for the Regulators.

Blaine Russell pitched eight innings for Sidney, and gave up seven runs on seven hits. He struck out five, and only allowed two walks. Sawyer Dickman also pitched 1.2 innings, striking out three while giving up one run and one hit. Sidney fell to 1-and-10 on the season, and were next scheduled to face Ogallala on the road on Tuesday.