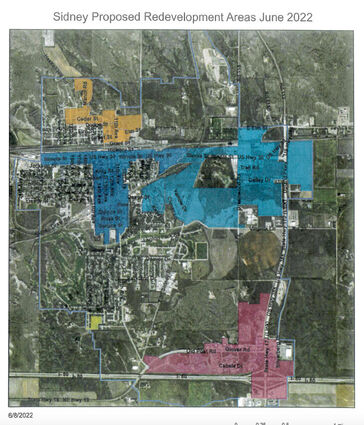 In November 2021, the Sidney City Council approved contracting with Five Rule Rural Planning to conduct a blight and substandard study.

In his report, City Manager David Scott said the City is now in the process of that study, and presented maps for the council's review.

Scott said the last full blight study of the city was done in 1994. The Nebraska Department of Economic Development requires a blight study be conducted every 10 years, he said.

According to Nebraska Revised Statute 18-2103, (for the purposes of Community Development Law), “Blighted area means an area (a) which, by reason of the presence of a substantial number of deteriorated or deteriorating structures, existence of defective or inadequate street layout, faulty lot layout in relation to size, adequacy, accessibility, or usefulness, insanitary or unsafe conditions, deterioration of site or other improvements, diversity of ownership, tax or special assessment delinquency exceeding the fair value of the land, defective or unusual conditions of title, improper subdivision or obsolete platting, or the existence of conditions which endanger life or property by fire and other causes, or any combination of such factors, substantially impairs or arrests the sound growth of the community, retards the provision of housing accommodations, or constitutes an economic or social liability and is detrimental to the public health, safety, morals, or welfare in its present condition and use.”

Scott said the City can define up to 35 percent of the city's area as blighted.

The map presented in the June 14 city council meeting is for 28.5 percent.

In his presentation, Scott said there are multiple reason to conduct the blight study. A complete and up-to-date blight study is necessary if the City is to move forward with workforce housing funds from state and federal programs. The City has completed a housing study and is working with Baird Holm Attorneys at Law to put together an incentive package for developers and builders.

The project was scheduled to mature in December of this year. Kizzire reported adequate tax was collected to close the project early.