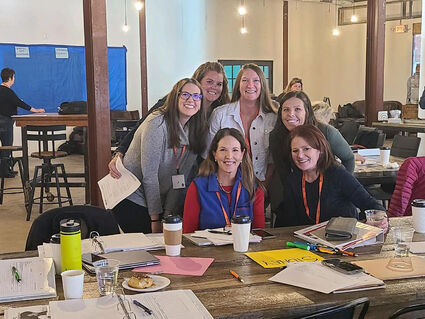 How does a person move from an idea, a dream, to a successful business?

That is one of the challenges “E3” is researching.

The program started with six communities and has grown to 66 communities in Kansas. Communities mentor each other toward growth. Ord, Neb., is mentoring Sidney.

The E3 committee presented the program to the Sidney City Council on June 14. The purpose of E3 as presented to the city council is to “develop a network of resources in Sidney and Cheyenne County to drive opportunity through sustained investments in entrepreneurship and community improvement.”

The presentation was led by Sarah Sinnett and Corey Keen. Sinnett is on staff at G.L. Huyett and Keen is Development Manager for Nelnet.

They said some of the uniqueness with the E2 and E3 programs are they are led by private industry.

“We were chosen as one of six communities in Nebraska. We're modeling a lot of this over Ord, Neb,.” said Sinnett.

Ord moved from a dying town to a community that has leveraged more than $250 million in funding, benefiting more than 100 small businesses.

Some of the focus points in Sidney are the Interstate 80 corridor, retirees, growing entrepreneurs, The project is also looking toward asset mapping, a one-stop-shop information source. When someone has an idea for a new business, where do they go for advice and direction: funding, how to write a business plan, finding a location to open a business, assets available at the Western Nebraska Community College in Sidney.

Sinnett told the council the hope is to expand the program beyond Sidney to include Cheyenne County.

The Kansas Leadership Center recently held a virtual session June 15 to review the experience of meeting with various communities. Alejandro Arias-Esparza, custom civic engagement manager, was part of the research in Sidney. He said success looks different to each community; not all communities want to be another Omaha. Communities want to grow in what they have.

He added there is a frustration of “the same seven at every meeting.” He said misinformation is another concern.

“Hearsay is one of the biggest deterrents,” he said.

He said after a time negative people are not invited to meetings. He stressed that disagreeing doesn't mean either position is incorrect.

“We need communities that can productively disagree on the future of their town,” he said.

Every six months, the program hosts a listening tour stop. Sidney will be a host site in September.