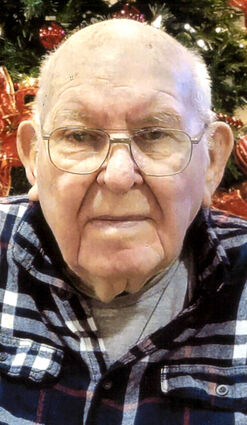 Douglass “Doug” D. Smith, age 90, of Dalton, NE passed away on July 11, 2022 at Heritage Estates in Gering, NE. Casual attire is requested for the Funeral Service which will be held at 10:00 A.M. Saturday, July 16, 2022, at the United Church of the Plains in Dalton, NE with Pastor Leon “Bud” Gillespie officiating. Burial will take place in the Dalton Cemetery. Services will be recorded and available on our website for viewing. Memorials may be given to the Dalton Volunteer Fire Department or the Donor’s Choice.

Friends may stop at the Gehrig-Stitt Chapel on Friday from 1-6:00 P.M. and leave condolences for the family. Family will be present from 4-6:00 P.M.

You may view Doug’s Book of Memories, leave condolences, photos and stories at http://www.gehrigstittchapel.com.

Douglass Dean Smith was born November 10, 1931 to William (Billy) and Myrtle (Nelson) Smith. He grew up north of Potter and graduated from Potter High School in 1949. Doug married Ardis D. Westerhoff on June 10, 1951 in Dalton at the United Presbyterian Church. To this union, five daughters were born: Kay, Patty, Deanne, Vicki and Robin. They were blessed with 16 grandchildren, 35 great-grandchildren and 3 great-great-grandchildren.

When first married, Doug worked in the oil field. During this time, they moved 14 times in 5 years. After moving to the farm in Dalton, Doug worked for the Egging Company as a welder and truck driver before becoming a full-time farmer. After residing in Potter for 11 years, Doug and Ardis moved back to the family farm in 1977 where they lived for the next 42 years before moving to The Village in Scottsbluff in 2019. In November of 2020 they moved to The Heritage in Gering following several illnesses.

Doug’s years were filled with farming, restoring classic tractors, motorcycle rides, traveling to grandkids and great grandkids school activities. He and Ardis enjoyed riding his motorcycle with the Dalton gang and made it to Sturgis a couple times. He served on the Potter Fire Department for 10 years and on the Dalton Fire Department for 50 years. Doug and his best friend, Harold (Wink) Winkelman, cooked steaks for the annual Fireman’s New Year’s Eve celebration for many years until they were both in their 80’s.

Doug is survived by daughters Kay Soule of Gering, Patty Moench of Potter, Deanne and husband Carl Ellingson of Benson, AZ, Vicki and husband Robert Hilpert of Potter, and Robin and husband Greg Prochazka of Lincoln, and many nieces and nephews.

Doug was preceded in death by his wife Ardis of 70 years, his grandparents, his parents, his brothers Wally, Loren and Lesten, sisters Barb and Karyn, and his sons-in-law Ed Soule and Don Moench.