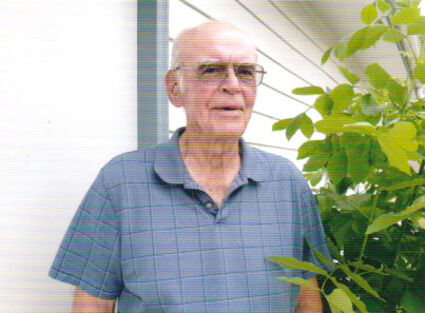 At the time, the United States was only five years out of World War II, American society had changed because all the “boys” had returned to the local communities, technology was changing, health care was improving, and… the drumbeats of war were starting to be heard again. The Draft system was in effect, meaning that if you hadn’t enlisted in the Armed Forces, you might be taken by the draft for military service.

The US Air Force had come into being in 1947. It was the next step in importance and function in moving forward from the US Army Air Forces. In many instances, some of the equipment used by the new Air Force was still being used from the AAF. One of the most obvious uses was the olive-drab green uniforms bearing the new Air Force rank, to say nothing of the institutional changes.

Don was in contact with the local Selective Service Board, and its secretary. She advised him that he was close to being drafted. Don and a buddy went to the recruiting offices in Denver, CO. They talked to the Army recruiters who promised them great experiences. Hopefully, the Army could possibly get the men into the service soon. The Air Force recruiter told them he could have the young men on an airplane that night. In Today’s words…”Boom!”

The flight took them to Clark AFB in California and then bus transportation to Camp Parks, California, not far from San Francisco. There, they joined up with a group of 40 or so other young men. They formed up into a “flight”. (In the Army, it’s a platoon.) Don and his buddies were standing around before the flight formed up. A smaller, older serviceman, one with rank, approached Don and all. The older serviceman asked if anyone of them could “whip” him” ? No one commented but Don’s buddy told him “Kizer can”.

Immediately, the older man got in Don’s face, neck muscles strained, red-faced “ YOU think you can whip ME ?” Don said… “yeah”. The older man backed off and, still very aggressive, said “GET TO THE ORDERLY ROOM!” (office). Don said he thought that this was the end of his Air Force life…

At the orderly room, again, the older guy got in Don’s face and asked the same question and got the same response… “yeah”. Immediately, Don was appointed as the “flight leader”!

The pay for the airmen at this time was $37.50 per month. Airmen had to go to the pay officers office and line up alphabetically. When it was his turn, Don reported for pay…” Sir, Airman Kizer, Donald L. reports for pay!”

In “Basic”, he and the others were to learn drill and ceremonies, first aid, wear and care of the uniform, rifle marksmanship, land navigation etc. Don was an expert shooter with the rifle and managed the other subjects with ease.

During his early interview to get into the USAF, Don had taken a test called the ASVAB (Armed Services Vocational Aptitude Battery). The result of this often- understated but very important test helped the branch of service to decide what work you would be best at. In Don’s test results, he could be trained as a clerk.

Upon graduation from Camp Parks, his First Sergeant told him he was going to be a clerk. Don went on to New York for this assignment of four years. The work as a unit clerk was good and steady. He produced the daily required information and was a vital part of the unit administration.

The USAF put a freeze on promotions for some job titles. One of those titles was that of the unit clerk. Don immediately began cross-training in different fields offered by the Air Force.

One field selected by Don was that of Tactical Missiles. He was able to shift careers and was transferred to Lowery AFB in Denver for this new training. In the process of on-the-job training, he would see duty at Peterson AFB in Colorado Springs, then to Orlando, Florida.

After this significant amount of training, Airman Kizer was headed for Germany. Don and others would help set up mobile rocket launching capabilities. This function would operate out of Hahn Air Force Base. At this location, the mission was to provide missile deterrence toward Russian aggression. The personnel configuration included a Commanding Officer, junior officers and enlisted men making up the launch crew. Don managed the maintenance team.

The rockets would be openly displayed on one or more launch pads, big and openly bold so that the enemy could see them. The range of the missile was such that it could easily strike targets within the “almost-enemy” area. Much of the actual daily work consisted of training drills and “make-sure” activity.

Don was the non-commissioned officer in charge of the group that worked around the clock, 24/7.

When the American Airmen arrived, they found lodging in the homes of the German population. The guys liked their accommodations and likely found the beer dispensaries quickly! When Don’s wife and kids joined him, they lived with a German family. The Frau of the household taught Don’s oldest son a lot of the local language. The process of arranging and completing travel for Mrs. Kizer and three kids was not easy. He and his family traveled to Switzerland and around Germany quite a bit. Don had a 1953 model German car then obtained an Opel automobile.

A highlight (?) of military service is that one moves around quite a bit. After time in Germany, Don was next directed to serve in France. The area was in the northwestern area of the Country at Mont Saint-Michel.

The place isn’t far from the beaches of Normandy. Don said there was still live ammunition about, so one had to be aware!

The land also featured the trenches that were dug by soldiers of WW1.

Later in his career, Don was part of the “Thor” missile system that was launched from Vandenberg AFB in California. This was an early satellite-delivery effort. Don was proud to have been a part of that.

A “Thor” launch pad was situated on Johnson Island. It was a test site for this particular missile. Don and many other men would go there for 90 day stretches of time, then return to the US for a few months, then do it all again! At Johnson Island, Don was situated on scaffolding placed around the actual rocket. The men were making an adjustment. The three retro-rockets were running. One of the retro-rockets’ engines developed a malfunction and the three men including Don had to launch themselves off the scaffolding to the ground to avoid being struck by debris from the engine. From the fall, Don sustained an injury to his mouth and lower jaw. There was a medical clinic nearby so he got help fairly quickly. Don’s injuries were significant. However… “could have been worse”

The people that worked along side Don brought him the best memories of his military life. The comradeship, close associations and families were priceless points of him and his family’s lives.

He had earned an option to determine where his final assignment would be. He chose White Sands Missile Range near Alamogordo, New Mexico. One feature of the base was its 10 mile launching track used in testing missiles. He really liked it there and went to work doing something different every day.

After 21 plus years, Don left the US Air Force. He moved his family back to Julesburg, CO. He had heard that the local natural gas company was hiring and he went to work right away… for more than 20 years.

He did get the house his family moved into in great condition and still calls it “home!” Don had a military retirement, VA benefits, and a solid career. Don earned the Meritorious Service Medal, USAF Commendation Medals, the Good Conduct Medal and the National Defense Service medal.

The US Air Force Master Sergeant said that he would recommend young people to serve their County.

Master Sergeant Don Kizer, you served your Country well. Thank you for that!