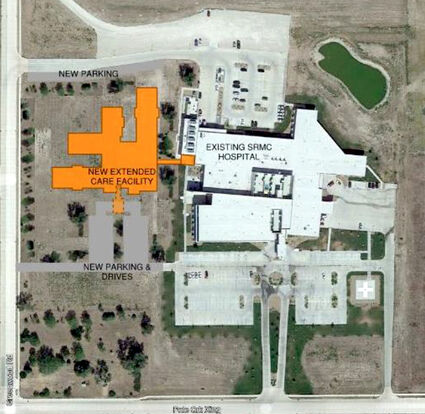 Sidney Regional Medical Center is moving ahead with plans to consolidate and expand its facility.

Plans include moving Extended Care to a new wing on the west side of the existing hospital. The new facility will include a “Memory Care” wing among its four wings, and 63 beds. The Extended Care facility is currently located on Osage Street in Sidney, adjacent to the “old hospital.”

SRMC administrator Jason Petik recently addressed the Cheyenne County Board of Commissioners on the project. He said the concept of moving Extended Care to a new facility adjacent to the hospital is in part due to the cost of maintaining the current building.

“We were looking at $8-$10 million just to put siding, windows” and carpet on the Extended Care building, Petik told the commissioners. The new facility will also have a more efficient floor plan, designed to “enhance efficiencies through a layout that improves the residents and families' experiences,” according to a July press release.

The new building, on a 10-acre tract adjacent to the hospital, is projected to cost about $19 million.

In July, SRMC received confirmation that the USDA Rural Development approved financing of the project at 2.5 percent for 40 years. The USDA will be financing $12 million of the project $19 million project. The remaining funds will be from a combination of a capital campaign in conjunction with a cash investment from SRMC.

Petik also highlighted staff changes occurring at the hospital, including several surgeons and speciality doctors. He added the hospital is urgently seeking nursing staff as well.

“We could hire as many RN's as we can right now,” he said.

He said the hospital is offering full-ride scholarships, scholarships to the Western Nebraska Community College nursing program, and sign-on bonuses. He said the facility needs five to 10 nurses immediately.

“Really, this shortage is in acute and long-term care,” he said.