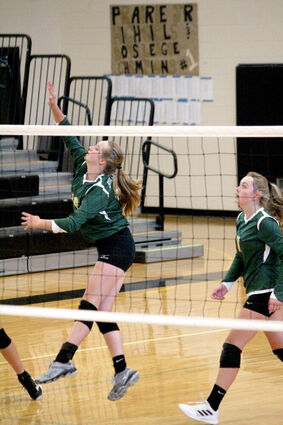 Peetz's Lady Bulldog Volleyball team has been improving with a roster of young players, but have yet to get over the hump and start winning matches. After starting the season against powerhouse Fleming, they Lady Bulldogs next had to face defending 1A State Champs Merino on Tuesday, August 30. The Lady Bulldogs offered little competition to the Lady Rams, dropping three sets to the Merino squad.

But on Thursday August 31, the Lady Bulldogs had a chance to get in the win column, traveling to match up with the Prairie Lady Mustangs. Although the Lady Bulldogs were able to play together and stay in system better than their two previous matches, they still had too many errors to get past Prairie, who came into the match with two losses. The Lady Bulldogs dropped the first two sets both by the score of 25-to-9, but played a much better third set, pushing the Lady Rams to the limit before falling by a score of 25-to-17.

Although winless, the Lady Bulldogs have some talented, if inexperienced, players that should improve as the season progresses. They have some length, with freshman Ashlyn Schmidt anchoring the front line and getting up for blocks and kills. Peetz looks for their first win when they travel to Briggsdale on Thursday to match up against the Lady Falcons.