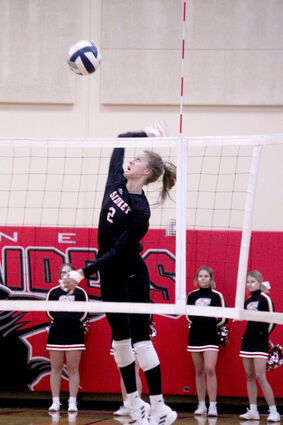 The undefeated Lady Raider Volleyball team traveled to Ogallala Thursday for a triangular with Ogallala and North Platte, and after defeating the Lady Bulldogs to start the day, fell to the Lady Indians in the second match for their first loss of the season.

Ogallala started off the action by defeating North Platte without much drama, 25-to-11 and 25-to-14. Sidney then matched up with North Platte, and opened up a sizable lead to start the first set. But the Lady Bulldogs fired back, and tied the set at 10-to-10. Sidney was able to battle back with a run of their own, and closed out the first set 25-to-21. The second set had Sidney stumbling out of the blocks, and North Platte building a 10-to-1 lead.

However, the Lady Raiders found their groove and stormed back, going on a 20-to-3 run. North Platte battled back in the end, but the Lady Raider momentum was too much to overcome, and Sidney took the second set 25-to-20 and the match 2-to-0.

Next Sidney faced off against the Ogallala, and the first set was a tight battle, with the teams tying the score 9 times. Ogallala finally went on a run to end the set in their favor, 25-to-19. Sidney rebounded from their first lost set of the season with an impressive opening run in the second set, leading to a 25-to-14 win in the second set. The third set was a tight battle, but six Sidney service errors kept the Lady Indians in the set, and Sidney's final service error at 23-to-22 sealed the set at 25-to-22 and the match 2-to-1 for Ogallala.

Karsyn Leeling had 27 kills in the two matches to lead the Lady Raiders. Sidney next travels to Mitchell to match up with the Lady Tigers on Tuesday.