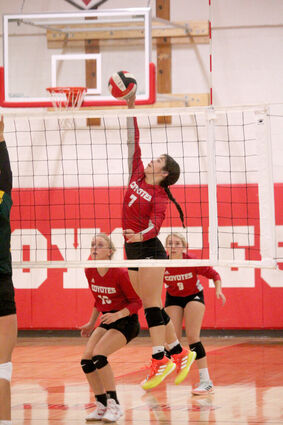 Potter-Dix's Lady Coyote Volleyball team continued their outstanding start to the season, outlasting Sioux County in Harrison Friday with a 3-to-2 match victory to move their record to 11-and-0. Sioux County had an uneven start to their season, coming into the match with Potter-Dix losing three of their last four matches, and looked a bit out of sorts starting against Potter-Dix. After dropping the first set 25-to-18, the Lady Warriors regrouped and pushed the Lady Coyotes to extra points in the second set, eventually outlasting the Lady Coyotes and taking a 29-to-27 second set victory.

Potter-Dix settled down and put away Sioux County in the third set 25-to-17, but then stumbled badly in the fourth set, losing 25-to-12. The teams battle hard in the fifth set, but Potter-Dix was able to hold on and get the last points for a 15-to-12 fifth set victory, and a 2-to-2 match victory.

Seniors Lily Tabor and Tyenne Berner each had four kills, and senior Kailey Nicklas had three ace serves in the victory. Senior Jayden Shoemaker was solid at the net with four blocks and had 30 assists for the Lady Coyotes. Potter-Dix was scheduled for tournament action with Paxton, Wauneta-Palisade and Wallace on Tuesday, then back at home Friday against Banner county.