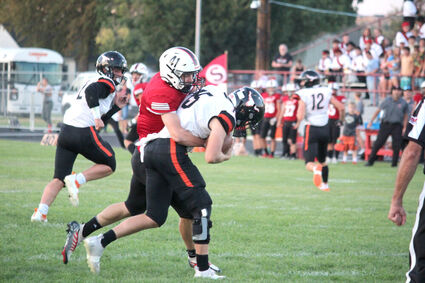 Sidney’s Red Raider Football team traveled to Mitchell Friday night and came out on the wrong end of a 44-to-20 final score against a powerful Mitchell Tigers team that remained undefeated. The game was a match-up between a big and physical team in the Tigers, and a young and speedy team in the Red Raiders, and this time, big and physical won the day.

Sidney would have to play mistake-free football and make big plays to stay with the powerful Tigers, and Mitchell showed their intent immediately by winning the toss and electing to receive. The Mitchell offensive line quickly established its dominance, opening big holes and pushing the Sidney defenders away.

The Tigers were able to steadily march down the field, with Mitchell standout running back Hayden Umble gaining big yards, and the drive was capped by a 14 yard touchdown run up the middle by Umble to give the Tigers the early 7-to-0 lead. Sidney started their first drive on their 24 yard line, but on the first play a high snap sent junior quarterback scrambling back to the eight yard line to recover the ball. Sidney went three-and-out and Doty punted to the 50 yard line.

Mitchell opened their drive with a pass that brought the Tigers down to the Sidney 24 yard line, ran a few more time to get closer, then junior Quarterback Cael Peters ran the ball, and then fought off Sidney tacklers for the last five yards on his way to a touchdown to make the score 14-to-0.

Sidney had a good return, but a fumble gave the ball back to Mitchell in Sidney territory. The Tigers gained yards running, but a few misfires in their passing game had them try for a 42 yard field goal, but junior Santi Castillo missed the kick, and the score remained 14-to-0. Sidney had a big pass play in their next series from Doty to senior Austin Roelle called back from a holding penalty, but were able to keep their drive alive when Mitchell was flagged for pass interference.

Doty then connected on a pass to senior Koleman Kaiser, and Sidney showed their speed when Kaiser took the ball down the sideline and outran the Tiger defenders for a touchdown to narrow the score to 14-to-7.

The Tigers were able to break tackles and keep driving, and scored another touchdown to go up 28-to-7 at halftime.

Sidney was able to score one more touchdown in the third quarter, but the big offensive and defensive lines of Mitchell stifled any chance of a Sidney comeback while continuing to score.

Sidney’s best play in the second half came late in the fourth quarter when sophomore quarterback Reid Fiscus pulled the ball down and ran for 78 yards and a touchdown. But the Raiders were only able to put up 13 points in the second half, and Mitchell cruised to the 44-to-20 victory. Doty was 5-for-11 passing the ball for 137 yards and touchdown. Senior Luke Holly rushed 12 times for 60 yards. Koleman Kaiser had 12 tackles and one pass reception for 70 yards and a touchdown.

Sidney moves to 2-and-2 on the season while Mitchell remains unbeaten at 4-and-0. Sidney next hosts 4-and-0 McCook on Friday, with the game scheduled for a 2 p.m. start.