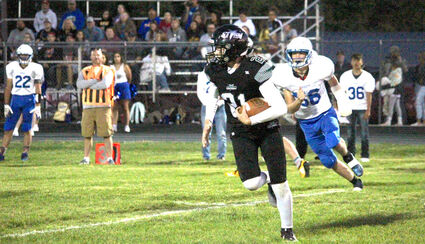 Creek Valley started with the ball but could not gain a first down, going four-and-out and surrendering the ball to South Platte at mid-field.

A few plays later, South Platte sophomore Jarrette Schwartz scampered into the end zone for the first of his six rushing touchdowns on the night. Creek Valley again went four-and-out on their next possession, and South Platte followed that up by converting on fourth down and scoring another touchdown to move the score to 16-to-0.

Creek Valley again went four-and-out, followed by another touchdown by South Platte to move the score to 22-to-0. In the second quarter, Creek Valley finally cashed in when freshman quarterback Zander Polk found freshman Mason Timm on the sideline for a long pass, and Timm was able to outrun the defense for a touchdown to get the Storm on the board at 22-to-7. But the Storm was able to score only one more touchdown before the half, while South Platte piled up 34 more points in the second quarter to take a commanding 56-to-13 into the halftime break.

South Platte put 14 more points on the board in the second half against Creek Valley's seven, resulting in the 70-to-20 victory for the Blue Knights. South Platte did the bulk of their damage on the ground, rushing 25 times for 235 yards. They passed for 111 yards in the victory.

Creek Valley was forced to throw the ball, and Zander Polk went 9-for-20 for 249 yards and three touchdowns on the night. Senior Seth Wilber reeled in two of the touchdown passes and had 124 receiving yards in the loss. Creek Valley travels to Harrisburg on Friday to match up with the 1-and-3 Banner County Wildcats at 7 p.m.