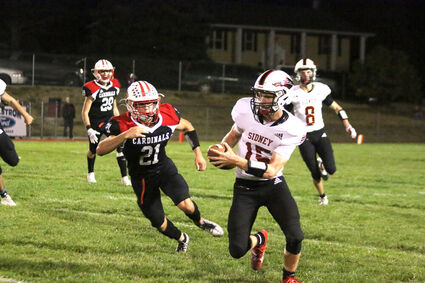 Sidney’s Red Raider Football team traveled to Chadron Friday for a division match up against the Cardinals, and after battling to a 7-to-7 tie at the end of the first half, the Raiders were unable to hold off the Cardinals and fell by a final score of 19-to-13.

The loss moves Sidney to 2-and-4 on the season.

Chadron won the coin toss and elected to receive, and after returning the kick off to the Chadron 43 yard line, went on a 57 yard drive to score and take a 7-to-0 lead.

Sidney started their first drive with an 8 yard run by junior Luke Holly, but were unable to gain any more yar...