Dude's Still has 'Steak' in Community

Even after 70 years, iconic steakhouse is going strong 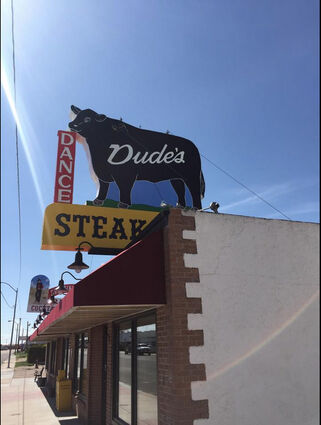 When one thinks of Sidney, they might associate the Nebraska Panhandle city with Cabela's. While the "world's foremost outfitter" is certainly a destination for many, locals know the true Sidney icon isn't found on Interstate 80 but on US Highway 30.

For 70 years, Dude's Steakhouse and Branding Iron Bar has been a landmark of Western Nebraska. Founded in 1952 by Deward and Florence Jelinek, Dude's is currently in its third generation. This in itself is an accomplishment as only about 13% of family businesses make it through the second generation.

Over the past seven decades, Cheyenne County residents have seen larger restaurant chains come and go but the one constant has been Dude's. After being started by the Jelineks, it was handed down to Patty (Jelinek) and Larry Gorman. Now it is in the hands of Joseph (Joey) and Sarah Gorman and Jennifer Gorman.

Dude may seem an odd name for a steakhouse, something one might expect to see as a restaurant on film in 1980s California. The name, however, comes from its founder, Deward. If anyone looks closely, they may also notice that the cowboy which sits above the building has only one arm, another tip of the hat to its founder. According to a 2012 interview with the Gorman family, Dude lost his arm to cancer. Opening and running the steakhouse was just one of many ventures Deward had in Sidney. He was also a cattleman and farmer.

In recent years, like an old cowboy weathering a storm, Dude's has put its head down and pushed ahead.

In 2017, Bass Pro Shops finalized its $5 billion buyout of Cabela's. The resulting move of the corporate offices led to an economic downturn in Sidney with the empty office buildings still waiting for someone, anyone, to occupy them. Then, in 2020, a global pandemic brought about mandatory health regulations. Now, in 2022, staff shortages impact Dude's just as they impact any other business in the country. Guests to the restaurant are greeted with a sign asking they be patient as staff work to accommodate patrons.

Yet, the flashing neon "open" sign shows it remains undaunted. Dude's continues to defy temporary economic and social upheavals to remain a constant in an ever-changing world.

"What can you do but keep smiling?" said Joey. "Whenever we are faced with really tough situations or problems, we ask ourselves, 'What would Grandma and Grandpa or Mom and Dad do' and the answer forms itself."

There's more to Dude's than just it being a family-owned business, though that is an important aspect. Once guests walk inside, they're taken back in time with decor that can only be described as vintage. A fire pit installed in the 1970s, which still serves as the perfect place to have a drink and chat about the day, adds to the comfortable and cozy feeling.

Artwork lines the walls with one mural by artist Aaron Pyle depicting Fort Sidney, prairie pioneers and Native Americans. Classic, rounded booths are elevated above the rest of the dining room, another holdback from decades ago which contributes to the atmosphere.

Then there's the food. As one would expect from the name, Dude's has a wide variety of steaks ranging from prime rib to New York Strip to T-Bone. Every steak, which is cut the same day, is cooked to order and covered in a savory au jus and mushrooms. Other menu items include burgers, seafood options, sandwiches and Rocky Mountain Oysters. A diverse but simple menu that can appeal to a variety of tastes.

A staple of the area, Dude's has hosted many office Christmas parties, birthday parties and first dates since 1952. With its resiliency in the face of difficulty, it may be likely that Dude's will be around for at least another 70 years.

They will be celebrating their 70th anniversary on November 14th by giving one ticket per visit for a chance to win one of two $70 gift certificates in a drawing to be held November 30, 2022.