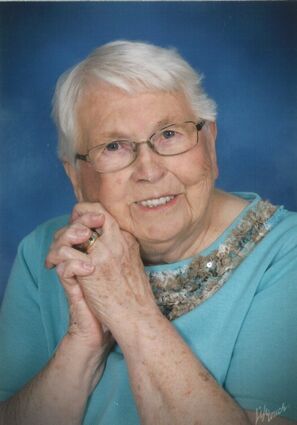 Margaret M. McCabe, age 92, of Dalton, passed away Thursday, November 3, 2022, at Kimball Health Services in Kimball, NE. The Rosary Service will be held at 10:00 A.M. on Wednesday, November 9, 2022. A Mass of Christian Burial will follow at 10:30 A.M. at St. Mary’s Catholic Church in Dalton with Father Tim Stoner and Father Bryan Ernest officiating. Burial will follow at St. Mary’s Catholic Cemetery in Dalton. Services will be live-streamed on the Gehrig-Stitt Chapel Facebook page and recorded for later viewing on our website. Casual dress is suggested. Friends may stop at the Gehrig-Stitt Chapel on Tuesday from 1-6:00 P.M. and leave condolences for the family. Family will be present from 4-6:00 P.M.

Memorials may made in Margaret’s name to St. Mary’s Catholic Church and the Dalton or Gurley Fire Department.

You may view Margaret’s Book of Memories, leave condolences, photos and stories at http://www.gehrigstittchapel.com.

Margaret was the daughter of Katherine (Kallhoff) and Antone Buddecke. She was born on October 26, 1930 in Dalton, NE. She was the fifth child out of fourteen.

Margaret attended school in Kimball and graduated in 1949.

She helped her mother with her younger brothers and sisters. She worked at an insurance company and then took a job at the Sioux Ordinance Depot as a stenographer clerk.

Margaret was united in marriage to Percy McCabe on July 13, 1951 at St. Joseph Rectory in Kimball. Margaret and Percy celebrated 56 years of marriage before Percy’s death in 2007. They lived in several places while moving with Percy’s job in the seismograph field. In 1954, they moved to Dalton where Percy worked for the Dalton school as a custodian. Margaret worked side by side with him and also in the school cafeteria.

Margaret made many wedding and birthday cakes as well as a talented crafter and seamstress. Her front room was home for the quilters. She made quilts for her children and grandchildren. The quilting group made blankets for many organizations-all made with love.

Survivors include her five sons and one daughter, Tim and wife Laurie of Gurley, NE, Mike and wife Pat of Mitchell, NE, Patty and husband Mike Mohr of Overland, KS, Bill and wife Lisa of Amherst, NE, and Larry and wife JoAnn of Maplewood, MN and Dan and wife Cathy of Guernsey, WY. 11 grandchildren and 15 great grandchildren, brother James Buddecke and sister Edna Balkwin, sister-in-laws Pat Buddecke, Dee Buddecke and Marcia Buddecke and a passel of nieces and nephews