Past decisions and present consequences 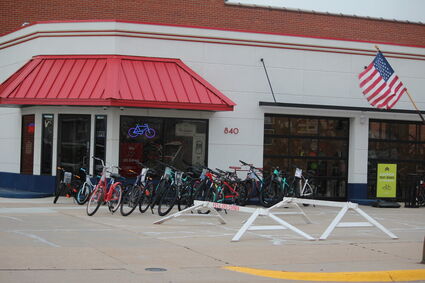 Victoria Loghry, owner of Pedaler's Corner, initiated a discussion with the Sidney City Council about agreements by past property owners and their impacts on economic development and urban renewal.

On November 8, while voters were deciding the future of the Sidney City Council, the governing body held a lengthy discussion about the past, present and future of the city.

The discussion was initiated by Victoria Loghry, who owns buildings and businesses in Sidney including the Pedalers Corner at 840 9th Avenue. Loghry's concerns were twofold; one centered around plans to landscape around Pedalers Corner and another dealt with electrical conduit on another building downtown resulting from agreements made by previous property owners. A common thread through the discussion was economic development and urban renewal.

A concern raised by Loghry repeatedly throughout the discussion was structural damage to her building in downtown Sidney due to electrical conduit. According to Loghry, the building has concrete and conduit on three sides of the building which runs electricity to surrounding properties.

"My building is a masonry building. Masonry is designed to move but now because it has all the electricity on it and it's got a unistrap that ties the huge conduit that runs along the building, it's tied in there so that the building can't move even though it was designed to," said Loghry. "It's a structural issue."

Mike Palmer, electric superintendent for the City of Sidney, clarified that the running of the conduit was something outside of the city's purview.

Palmer added that, in the case of electric running across one property to another, those were agreements made between property owners. This, said Loghry, was part of her contention as the issues she was dealing with were made by two parties who were no longer involved in the decision.

"You are saddled with previous owners' decisions, I will say that," said Palmer.

At the moment, however, there seems to be little recourse for Loghry. According to J Leef, city attorney, the code dictating the city take the electrical service to the property line was per state statute. Palmer stated that any electrical work done in Nebraska would be approved through the state electrical office, but that it was likely there was little if any codes related to structural engineering of a building.

Marshall Hall, chief building official, said he agreed with Loghry that something needed to be done.

"Vicky brings up an excellent point that some of this work is just being done willy nilly and not having somebody who really knows about brick, I'm not that guy by the way," said Hall. "I do know that, in Denver, whenever we had anything attached to a building, especially at height, it had to be engineered."

The sticking point, however, was that in Denver the cost of the engineer was borne by the property owner which could be cost prohibitive to small business owners in Sidney.

Though agreement between previous property owners was a major point of contention for Loghry, another issue she raised was that incentives for corporations which don't seem to be available for small businesses. Loghry cited Omaha and Jobbers Canyon as an urban renewal failure and an example of a larger corporation given "the keys to the city."

Jobbers Canyon, according to moderncities.com, holds the distinction of the largest National Register historic district lost to urban renewal to date. The 21 block economic center of Omaha was added to the register in 1979 but a decade later, it was demolished for ConAgra's corporate headquarters. In 2015, ConAgra left Omaha and relocated to Chicago, Illinois.

Councilmember Bob Olsen later asked Loghry for clarification on her comment asking for instances in which Sidney had made promises to larger businesses. Loghry cited Camping World, saying she believed they approached Sidney as a way to get a better deal from Cheyenne, Wyoming.

Eye to the future

Neither the governing body nor city staff appeared to disagree with Loghry on her points. Both the city and Loghry admitted that there was little that could be done in the immediate future, but that plans need to be both made and followed.

"We've watched parking issues because there's no signage where the public should be parking, could be parking, it's just kind of a free-for-all. We've seen dangerous U-turns, accidents. There's an immediate need for public restrooms downtown. If you want people to mill about, hang out downtown, we need the restrooms," said Loghry. "That's still just some place on a priority list that's been circling around for more than 10 years. I'm a real business. We need it right now, we don't need it in 20 years."

Mayor Roger Gallaway said the first step for the city would likely be to examine the city codes and city policy.

"Part of it is we have to identify what are the existing codes and policies that are in place and check to see if those are being followed or not. That's the starting point," said Gallaway. "The second part is, do we need to identify other codes and policies so that we deal with this in a more consistent manner?"

The next meeting of the Sidney City Council will be at 7 p.m. on November 22 at Sidney City Hall.