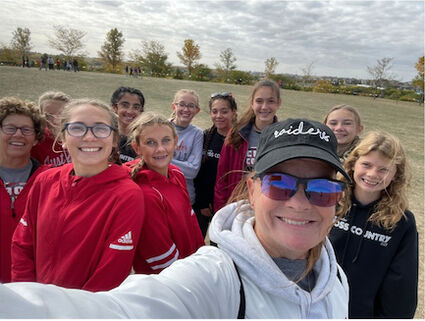 Sidney's great tradition in Cross Country and Track and Field was again recognized as Sidney High School Head Coaches Donna Wiedeburg and Matt McKay were named Coaches of the Year. 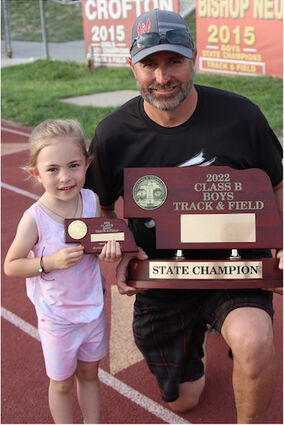 McKay with daughter Maddox at Omaha Burke Stadium after the Sidney Raider Boys team won the 2022 Class B State Championship.

Wiedeburg was named 2021-22 State Coach of the Year for Girls Cross Country by the National Federation of State High School Associations (NFHS) and Nebraska School Activities Association (NSAA). This annual award is to recognize Nebraska coaches for their dedication and achievement to the coaching profession. For sixteen years, Weideburg has coached the Sidney Middle School and High School Cross country programs, for ten years as an assistant coach and the past six years as head coach. Wiedeburg thanked all of the coaches and student athletes that have participated in the Red Raider Cross country program, saying, "The Sidney Raider Cross Country program is a family and I'm honored to be a part of it. I am hopeful for the positive impact this program will continue to have on its runners."

McKay was named 2021-22 State Coach of the Year for Boys Track by the NFHS and NSAA. He has coached track at Sidney High School for thirteen years, and four years as head coach. Prior to joining the Sidney Raiders, McKay was a track coach at Gering High School for nine years. McKay said, "This award was very unexpected and I am incredibly humbled to receive it. I have loved track all of my life and this is an incredible honor. I am pleased to have assistant coaches who work hard and are dedicated to helping each athlete get better."