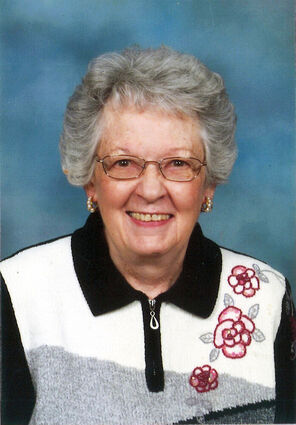 A Mass of Christian Burial was held on Monday, November 28, 2022 at the St. Patrick's Catholic Church in Sidney, NE with Father James Meysenburg officiating. The Funeral Service was live-streamed on the Gehrig-Stitt Chapel Facebook page and can be viewed on their website. Interment followed at the Greenwood Cemetery in Sidney.

Memorials may be given to the church.

You may view Grace's Book of Memories, leave condolences, photos and stories at http://www.gehrigstittchapel.com.

Grace was born March 2, 1926 in Sidney, NE the third child of Francis J. and Gertrude (Heeg) Herbert. Her father died when she was six months old and her mother raised the children alone until marrying Frank Bruckner when Grace was ten years old. Grace attended St. Patrick's Grade School, St. Joseph's in Platte Center, and then back to Sidney attending St. Patrick's, graduating as a Junior. From 1942-1943 she attended Duchesne College in Omaha for one year to become a secretary.

Grace worked at Sidney National Bank, now Security First, retiring in 1993. She spent the next 20 years working as the secretary/treasurer for CA Story. Grace was the last member of the 6 Women Coffee Group which met in Sidney weekly for several decades.

Grace had a deep love for the Catholic faith and devotion to Mary. She prayed several decades of the Rosary daily. She was an active member of St. Patrick's Catholic Church in Sidney serving funeral dinners, working at the rummage house and church bizarre, and a member of the Altar Society and the Catholic Daughters of America.