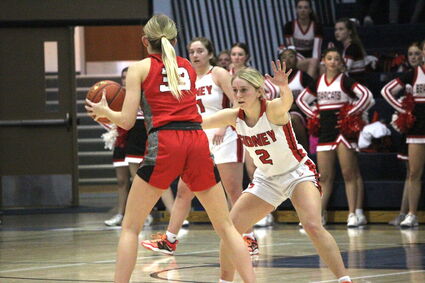 Sidney's Lady Raider Girls Basketball team defeated Scottsbluff Saturday to win the Western Conference Tournament and jump out to their first 3-and-0 start since 2008. Sidney's sharp shooting and tough defense took them to the championship round, first with a blowout defeat of Arvada on Thursday then by outlasting Chadron Friday night to set up the showdown with Scottsbluff Saturday afternoon for the championship.

Thursday's contest was similar to last year's game against Arvada to start the tournament, and ended in an expected big win for the Sidney girls. The Lady Raiders' smothering defense kept the Arvada squad off the board for the entire second half and only allowed four points total in the 88-to-4 win for Sidney. Senior Reese Riddle led the scoring for Sidney with 25 points, followed by junior Karsyn Leeling with 12 points and sophomore Carli Black with 10 points in the victory.

On Friday it was a different story as Sidney and Chadron played a close game, with the teams battling throughout the contest. Sidney's defense was able to hold back Chadron in the fourth quarter to give the Lady Raiders a five-point win, 49-to-44. Riddle agains led the scoring with 14 points, followed by junior Chloe Ahrens with nine points in the win.

Saturday afternoon's showdown with the Scottsbluff Lady Bearcats was held on the big court at WNCC-Scottsbluff, with a big crowd present for the matchup. Sidney would need to hold down Scottsbluff's sharpshooting senior Payton Burda, who hit a school-record 10 three point shots in the previous day's win over Gering.

Sidney was ready for the challenge, with senior Rheagan Stanley mirroring Burda's every move, disrupting her rhythm and preventing her from connecting on any three point shots. Stanley and the Sidney defense kept Burda scoreless until the fourth quarter, and held her to just one field goal for two points in the entire contest. After trailing in the first half, Sidney came back and pulled away from the Lady Bearcats. The Sidney defense was able to shut down the Lady Bearcats' offense in the second half, forcing turnovers and bad shots while clogging up the inside and grabbing rebounds. The Lady Raiders did a great job a taking away the Scottsbluff passing lanes and let their patient offense pad the big lead by moving the ball around and running down the clock.Reese Riddle again led the offense, driving inside and tallying 21 points to lead all scorers followed by junior Payton Schrotberger with 9 points in the win.

The Lady Raiders next go on the road Friday and match up against Chase County, who have opened their season 2-and-0 with big wins over Cozad and McCook.