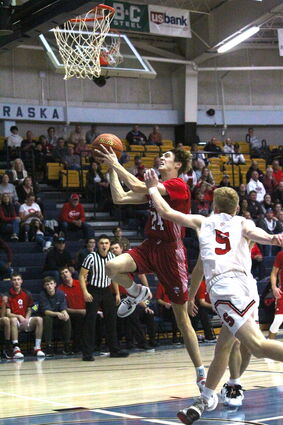 Sidney senior Jacob Dowse flashes past the defense to put up two points against the Bearcats on Saturday at WNCC-Scottsbluff.

Sidney's Red Raider Boys Basketball team was unable to break through against the Scottsbluff Bearcats' defense in the fourth quarter on Saturday, and had to settle for runner-up honors as they fell to Scottsbluff 65-to-59 in the championship game of the Western Conference Tournament at WNCC-Scottsbluff Saturday afternoon.

Sidney made it to the championship game by way of a big win against Mitchell in the first round of the tournament, in a game played at Gering High School. The Red Raiders jumped out to a big early lead on a hot start by senior Micah Schneider's 15 points in the first quarter, giving Sidney a 22-to-12 first quarter lead. Sidney's offense stayed hot and their defense did a great job shutting down the Tigers' offense and led 40-to-18 at the half. Sidney cruised through the second half for a 72-to-40 win, led by Schneider's 23 points followed by senior Jaeden Dillehay's 14 points.

Sidney next matched up against Gering, and the Bulldogs jumped out early to a 16-to-6 lead before the Red Raiders went on a big 28-to-8 run to build a 34-to-24 halftime lead. Sidney continued their strong offensive showing and put up 21 points in the third quarter to give the Raiders a 55-to-34 lead going into the final period. Sidney then held off the Bulldogs and cruised to a 67-to-52 win. Seniors Isak Doty and Jaeden Dillehay each had 16 points for the Red Raiders in the win.

Saturday late afternoon had the Red Raiders match up with Scottsbluff, who had defeated Arvada 81-to-24 on Thursday and Sterling 65-to-37 on Friday to advance to the championship game. Again, Sidney jumped out to a quick start with Schneider again draining three three point shots in the first period to give Sidney an early 18-to-10 lead. But the Bearcats went on a run starting late in the first period, and gained momentum until they tied Sidney at 20-to-20 about halfway through the second period and continued to score. Sidney battled back from six points down in the final seconds to cut the Bearcats' lead to three at 30-to-27 at the half.

But Sidney just could not get their offense back into a rhythm in the third quarter, and had some costly turnovers converted for easy points that let the Bearcats build a 49-to-40 lead going into the fourth quarter. Scottsbluff put senior Tate Talkington on Micah Schneider, and he guarded Schenider so well he scored no points in the second half until the very end of the fourth quarter. Sidney battled back and patiently closed the gap to 50-to-49, but a few key missed shots and a few critical turnovers down the stretch gave the Bearcats the ability to pull out the six point 65-to-59 win. Doty led the offense for Sidney with 16 points while Scheider finished with 15 points for the game. Sidney next travels to Imperial on Friday to match up with the 1-and-1 Chase County Longhorns. Chase County opened the season with a 59-to-49 win over Cozad at home, then lost at McCook 67-to-41.