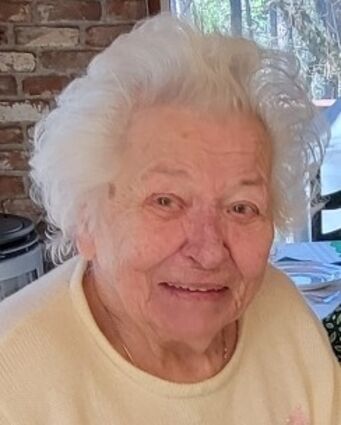 Sophia Olga Fehringer, age 96, of Placerville, CA passed on December 7, 2022 in Placerville, CA. A Mass of Christian Burial will be held at 11:00 A.M. Saturday, December 17, 2022 at Sacred Heart Catholic Church in Peetz, CO with Father Michael Bodzioch officiating. Visitation will be at the church from 10 AM until service time. Interment will be in the Sacred Heart Cemetery in Peetz, CO. Services will be livestreamed on the Gehrig-Stitt Chapel Facebook page and recorded for later viewing on our website.

You may view Sophia's Book of Memories, leave condolences, photos and stories at http://www.gehrigstittchapel.com.

Sophia was born August 2, 1926 in Chicago, Illinois to Anthony Owak and Nellie Paleczna.

Sophia spent her youth in Chicago. She married Louis Fehringer on June 8, 1946. They had three children: Bonita, Robert, and Margaret. Sophie and Louis were married for sixty-five years and lived in Cheyenne Wyoming, Belmont, and Silver Lakes California. Louis passed away in June of 2011.

As a newlywed, Sophia embraced the farm life of Nebraska and Peetz Colorado. She became an excellent cook and thoroughly enjoyed her new family. Sophie relished her role as family historian, and lovingly compiled many albums of family memorabilia. Sophie was an expert seamstress and craftsperson. She was locally famous for her porcelain doll collection, each doll poured and molded by Sophie, and outfitted in handmade clothing.

Sophia relocated to Placerville in 2012. Sophia was active in the arts and crafts program at Eskaton and was instrumental in establishing a Eucharist program for the residents and faithfully distributed communion weekly.

Sophia is survived by her son Robert and wife Colette of Camino, CA, daughter Margaret Thiele and husband Richard of Cheyenne WY, and her three grandchildren: Chelsea Fehringer of Phoenix AZ, Sarah Burdett and husband Robbie and Benjamin Thiele of Cheyenne, WY.

Sophia was pre-deceased by her beloved husband Louis, her loving daughter Bonita Hutt, her parents, three sisters and her brother.