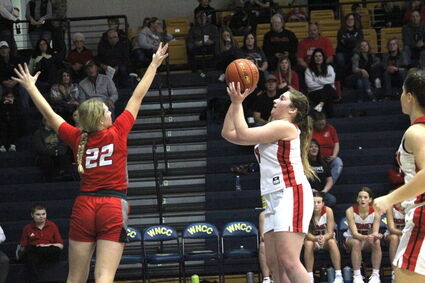 Sidney's Lady Raider Girls Basketball team moved to 4-and-0 early in the season, and have shown they have mental toughness and defense to close a gap late in a game and shut down an opponent's offense to seal a win.

Going into Friday's road matchup with the Chase County Lady Longhorns , the Lady Raiders knew that the Lady Longhorns were a standout C1 team, coming off two lopsided wins against Cozad and McCook, and relied heavily on the offense of 6' senior forward Brynn McNair to win. The Lady Raiders looked to stay close, get a lead late and shut down the Lady Longhorns offense, and although the plan didn't go exactly to script, it was pretty close and had a happy ending.

Both defenses starred early in the game, with Sidney finally getting on the board first and then briefly holding a 2-to-0 lead, its largest of the contest, before the teams' offenses started clicking. Sidney kept the game close while McNair drove the Chase County offense, piling up 24 points by the end of the third period. Sidney battled hard, but started falling behind in the third quarter, and the Lady Longhorns were able to build a cushion going into the fourth quarter. Chase County did a great job shutting down Lady Raider leading scorer Reese Riddle, averaging over 19 points per game, to just nine points.

Early in the fourth period the Lady Raiders were down by eight points at 33-to-25, but then ratcheted up the defensive pressure, created turnovers and went on a 10-to-2 run to tie the game at 35-to-35 with under a minute left in regulation. Sidney sophomore Kayla Westby attacked from the inside, was fouled in the lane, then made one of two free throws to give Sidney a 36-to-35 lead with just seconds left.

Chase County called a time out to draw up a final play, a baseline full court pass, but Sidney Head Coach Tyler Shaw subbed in junior Chloe Ahrens specifically to defend against the inbound pass, and Ahrens was able to grab the pass attempt and then and run out the clock to cement the win for Sidney.

Westby led the scoring for Sidney with 16 points. Chase County's McNair scored 26 on the night, but only two points in the fourth quarter. She accounted for 26 of the Lady Longhorns' 35 points.

Next up, the Lady Raiders were on the road again Saturday afternoon for a matchup with an undefeated Bayard Lady Tigers team. Bayard's team is pretty much the class of C2, and a tough opponent with good defense, good length and led by the 21 points per game of junior standout Lexi Fiscus.

Sidney got off to a good start, led by seniors Reese Riddle and Rheagan Stanley on offense, pulling away with a 19-to-11 lead at the end of the first period. Sidney kept up the pace and expanded their lead until the final minutes of the first half when the Lady Tigers chopped away and narrowed the Sidney lead to just two points going into the final minute of the half. But Sidney hit two three point shots in the final minute to open the lead to 35-to-29 at the halftime break.

Bayard fought furiously in the third quarter, but Sidney was able to keep them at bay, and opened an 11 point lead at 49-to-38 going into the fourth quarter. Bayard started the fourth quarter with a score, but then two consecutive three point bombs by Reese Riddle put the Lady Raiders up 55-to-41, and they went on to win the game 62-to-46. Riddle led the scoring with 20 points for Sidney, and the Lady Raiders had 10 players in the scoring column on Saturday.

Next up, on Friday the Lady Raiders host the 4-and-0 Torrington Lady Trailblazers.