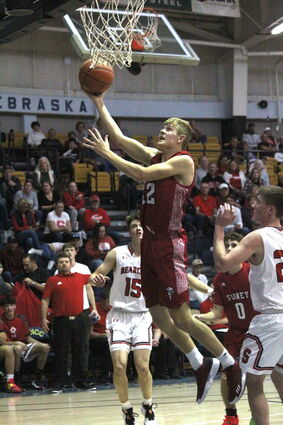 Sidney senior Koleman Kaiser scores during recent action. Kaiser and the Red Raiders have surged to a 4-and-1 opening to the 2022-23 season.

Sidney's Red Raider Boys Basketball team continued its hot start to the season with two more big wins to move their record to 4-and-1. The Red Raiders first traveled to Imperial to match up against the Chase County Longhorns. Chase County, led by multi-sport senior standout Kade Anderson, entered the contest with a win over Cozad and a loss to McCook to start the season. Sidney made short work of the Longhorns Friday night, opening up a big lead to start and then shutting the door on the Chase County offense.

Sidney started the game hitting three three-point shots in a row, opening a 9-to-0 lead to start the game and just pulling away from the Longhorns. Although the offense played well, with nine different players tallying points, it was the defense that impressed, keeping the Longhorns' scoring in the single digits in each of the first three quarters. Seniors Micah Schneider and Jacob Dowse led the Red Raider scoring with 14 and 12 points respectively. Sidney traveled again on Saturday for a match up with Bayard, an undefeated team strong in D2, but with not nearly enough firepower to keep with a team like Sidney. Again it was the Red Raider defense that impressed, causing turnovers and limiting scoring opportunities all game long. After doubling up on the Tigers in the first quarter, the Sidney defense ratcheted up the pressure and kept the Tigers to just six points in the second quarter to take a 36-to-15 lead at the halftime intermission.

Sidney continued to score in the third quarter, initiating the running clock and letting the bench players get minutes on their way to a 70-to-23 win. Senior Jaeden Dillehay and junior Isak Doty each had nine points in the win, and eleven Red Raiders scored points against the Tigers.