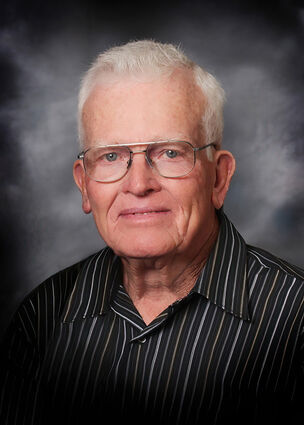 You may view Darold's Book of Memories, leave condolences, photos and stories at http://www.gehrigstittchapel.com.

Darold was born in Chappell on April 14, 1936 as the middle child to Edwin and Martha (Johnson) Cheleen.  Darold attended country school in his elementary years and graduated from Deuel County High School in 1954.  He then went on to Luther College in Wahoo, NE. After college he returned to the family farm to work. He enlisted in the Army National Guard in April of 1959 and served for six years.

On January 26, 1974 he married Beth Grasz Cook at the Berea Lutheran Church in rural Chappell where Darold had been a lifelong member. Through this marriage he became a father to Julie and a year later their son Jason was born. Darold was very active in the church, serving on the church council for many years and as a member of the Luther League and the Berea Church Men.

Darold enjoyed a lifetime of farming, starting at the age of 14 after the sudden death of his father, and continued farming with his brother Dayton and then his son, Jason for many years. In addition to farming, he worked for Leprino's for fifteen years and also held employment through Western Sugar Beet Plant, Kripal Motors, and Frenchmen Valley. He enjoyed bowling leagues as a young adult, loved everything Nebraska Huskers and was an avid LA Dodgers baseball fan. He also took great pride in his grandkids and loved following their numerous activities.