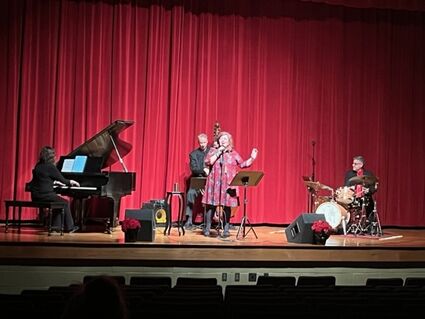 Carrick is a multi-faceted performer, and a veteran of cabaret, musical theater, opera and contemporary music stylings who tours around the Midwest. She's performed with Opera Omaha, the Omaha Symphony, Omaha Community Playhouse among many other theaters and venues. Her debut album, "Let's Fly", features a collection of re-imagined classic and contemporary songs from great American standards to jazz, folk and country hits and fresh takes on classics.

Many concert goers took advantage of Sidney's Public Transportation Department's 12 passenger buses for rides to and from the event due to the sub-zero temperatures and still-frozen roads that night. The buses were operating outside of their normal hours for the event as coordinated by the High Plains Arts Council.

Although the temperatures were cold outside, inside the Sidney High School Performing Arts Center spirits were warmed by Carrick's vocalizations of Christmas and Holiday classics. The evening was a success, filled with top-notch music and singing, and the attendees left filled with Holiday Spirit from the Christmas songs they heard that helped prepare them for the Christmas Holiday over the weekend.

The Sidney Public Transportation Department did a great job on a cold night ensuring that all concert-goers that needed transportation, to and from the event, were accommodated, lending a big hand in getting everybody in the Christmas Spirit and ready for their holiday.