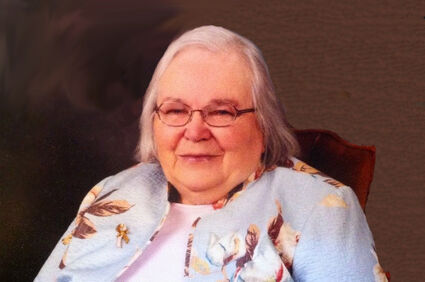 Linda F. Lenzen, age 90, of Sidney, NE passed away Monday, January 2, 2023, in Sidney. A Rosary Service will be held at 10:00 A.M. on Friday, January 6, 2023 followed by a Mass of Christian Burial at 10:30 A.M. at St. Patrick's Catholic Church in Sidney with Father Lou Nollette officiating. Burial will follow at Greenwood Cemetery in Sidney. Services will be livestreamed on the Gehrig-Stitt Chapel Facebook page and recorded for later viewing on our website. Friends may stop at the Gehrig-Stitt Chapel on Thursday from 1-6:00 P.M. to sign Linda's register book and leave condolences for the family.

You may view Linda's Book of Memories, leave condolences, photos and stories at http://www.gehrigstittchapel.com. Gehrig-Stitt Chapel & Cremation Service, LLC is in charge of Linda's care and funeral arrangements.

Linda was born March 13, 1932, to Stephen B. and Frances J. (Ernest) Hopkins of Dalton, NE. She attended District 19, a country school two miles from home, where she was the only student in her class from grades one through eight. In seventh grade, Linda memorized an essay which she recited at the eighth-grade graduation ceremony at a local auditorium.

For high school, Linda boarded Monday thru Friday at St. Patrick's Academy, a school run by the Ursuline Sisters in Sidney, NE. It was in high school that Linda's musical ability flourished. During the tenth and eleventh grades, she learned the piano and organ with great proficiency, as well as the clarinet. She played the pump organ for Sunday Mass at St. Mary's Church in Dalton for three years, starting at age 16. Linda obtained a scholarship to attend Ursuline College in Louisville, KY.

However, Linda chose to stay home for two years to help her mother care for Linda's elderly grandmother, who died in the summer of 1952. Linda went on to attend Ursuline College for two semesters in the fall of 1952 and spring of 1953. In January 1952, she became engaged to Arthur Lenzen, a Sidney farmer. On August 22, 1953, they were wed at St. Mary's Catholic Church in Dalton, and they moved into the farmhouse Arthur had built southeast of town.

Over the next twenty-two years, Linda gave birth to fourteen children, seven boys and seven girls. She would describe her family as being everything to her, "heaven and earth and sunshine and rain." Her children attended St. Patrick's Catholic Schools and then spread out to the four corners of the earth. In the meantime, Linda kept up her interest in music - singing in the church choir, playing the organ for St. Patrick's and many other local churches. Linda progressed from the pump organ to the electric pedal organ, large pipe organ, and finally to the newer electronic organ. She taught piano to her children, nieces, and many others upon request.

Linda joined many clubs in the Sidney area, including the Catholic Daughters, St. Gerard's Study Club, the Legion of Mary, VFW Auxiliary, La Leche League, and Extension Club, also known as Stateliners. She attended vocal, choral, and instrumental concerts throughout her life.

In later years, Linda devoted time to visiting friends. For many years, she played the piano at the Lodgepole Plaza Nursing Home, later called the Golden Living Center. She read voraciously and enjoyed watching Catholic programming on EWTN. A Third Order Franciscan since 1953, Linda encouraged her children and grandchildren in the practice of the Catholic Faith, by word and example, praying the Rosary many times daily for her children, relatives, and friends.

In 2005, Linda moved to Omaha and lived in her daughter, Teresa's, home. She visited the farm regularly. At this time, Judith began assisting Mother regularly in financial affairs, including subscriptions and gifts for family events. In 2017, Linda returned to the farm and lived with her son, Francis, now running the farm. Mother greatly enjoyed her daily visits with Francis about the cattle, and farm affairs. Teresa journeyed numerous times from Omaha, to help Agnes and was always great comfort to Mother. The weekly visits by Andrew and his dogs never failed to lift her spirits. Her son, Peter, came in frequently to help. In 2020, when her health declined, her daughter, Agnes, returned to the farm and provided wonderful care for her mother. Linda always enjoyed seeing her sons, Andrew and Bernard, and their families living close by, and her other children and grandchildren when they came to visit. She was happy to be in her farm home again for her final chapter. Teresa and Andrew were with Mother, providing comfort in her last days. Francis and Agnes were by her side in her final moments.

Survivors include her 13 children: Peter and wife Kyung Hee of Bloomington, IN; Judith and husband Dick Cooper of Manchester, MO; Mary Grant Miller of London, England; Gerard and wife Kelly of Hinckley, MN; Francis of Sidney; Paul and wife Maria of Irving, TX; Monica and husband Rich Claahsen of Plano, IL; Agnes of Sidney; Agatha and husband Joe Poteat of Omaha, NE; Lucy of Chicago, IL; Andrew and wife Lydia of Sidney; Teresa of Omaha, NE and Bernard and friend Mary Balfour of Sidney. She is also survived by 47 grandchildren and 14 great-grandchildren. She was preceded in death by her husband, Arthur, in February 2013, and son, John, in May 2016.

She was a loving mother, grandmother, great-grandmother, aunt, and neighbor. She never met a person she didn't like.