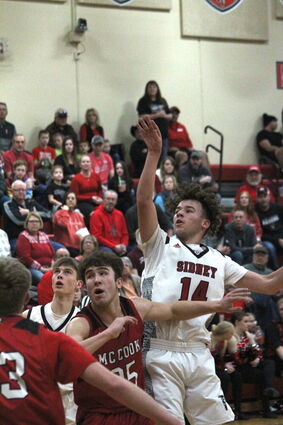 Senior Micah Schneider had the touch on Saturday, putting up two of his team-high 16 points against McCook.

Sidney's Red Raider Basketball team continued their hot streak, downing Gering and McCook over the past week to improve their record to 8-and-2 on the season.

Sidney was able to overcome a slow start in the Gering game, opening the contest with cold shooting and trailing Gering 13-to-9 at the end of the first period. Both teams employed a tough man-to-man defensive scheme that made good looks at the basket difficult and the pace low-scoring.

In the second period the Red Raiders started to find their touch, with senior Jacob Dowse leading the way with seven points in the frame, giving the Raiders a 25-to-20 lead at the halftime intermission.

But Gering battled back, with leading scorer Jackson Howard and Max Greeley finding their rhythm and giving Gering a 37-to-36 edge at the end of the third period. But Sidney started the fourth quarter hot, putting up seven unanswered points and pulling away from the Bulldogs for the rest of the contest. Sidney did a great job on capitalizing on Gering turnovers, and sealed the victory, 58-to-47. Senior Jaeden Dillehay led the scoring for Sidney with 14 points, followed by Dowse with 13 and junior Isak Doty with 12 points.

On Saturday the Red Raiders were home to host McCook, a team that has also had a hot start and came into the contest with a 7-and-1 record. This matchup turned into a very physical contest, with both teams playing tight defense and plenty of fouls on both sides. After Sidney built an 11-to-7 lead at the end of the first period, the Bison came back during the second period, getting inside and hitting their shots to tie the game at 22-to-22 at the half. The teams combined for a total of 27 fouls in the first half. Both teams were victimized by fouls that weren't called, and fouls that should not have been called, prompting McCook Head Coach Joe Imus to plead with one of the refs, "Look at how few guys we have-if you continue this we won't be able to finish the game," as he pointed to his diminished bench. The referee replied that he needed to coach and let the referees call the game and was admonished to stop complaining.

In the second half, both teams played more under control, dramatically reducing the foul calls. After senior Micah Schneider drained a three pointer to give Sidney a 28-to-22 lead, the scoring came at a steady pace. McCook narrowed the lead to 36-to-34, before junior Isak Doty banged down a three for his first points of the game, and gave Sidney a 39-to-34 lead going into the fourth period. Sidney's defense did a great job clogging up the inside lanes and forcing long shots that McCook repeatedly missed. After a series of Sidney turnovers, the Bison were able to narrow the lead to one point at 41-to-40, then Sidney turned it on and opened a 49-to-44 lead. After Doty had a nice block on a McCook shot, Imus was called for a technical foul, and the Bison looked frustrated and finished. Dillehay and Schneider made their free throws down the stretch, and Sidney earned the 52-to-44 victory. Schneider led the Red Raiders with 16 points on the night, with Dillehay adding 12 points for the Sidney squad.

Sidney moved to Senior Micah Schneider had the touch on Saturday, putting up two of his team-high 16 points against McCook. and were scheduled to travel to Mitchell for a match up with the Tigers on Tuesday.