Mayor Appointed to Housing Authority Board 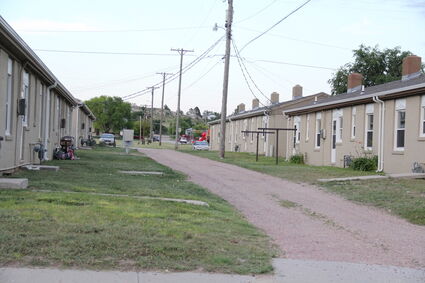 Sioux Villa, located on the Northern side of Sidney is the topic of recent City Council conversations.

The Sidney City Council unanimously appointed Mayor Brad Sherman to serve on the Sidney Housing Authority Board at their January 10 meeting. Prior to the appointment, the council discussed the goal of the board and potential upcoming projects.

The Sidney Housing Authority Board consists of five members, one of whom is a current member of the city council. Another member must be a resident of either the Sioux Villa Apartments at 1844 Ash Street or the Western Heritage Apartments at 2459 11th Avenue. The housing authority operates under Housing Partners of Western Nebraska.

Sherman, prior to his appointment, encouraged new council members Paul Stromen and Brandon Bondegard to consider serving on the board.

"An excellent opportunity for a brand new council member to pad their resume a little bit," said Sherman.

Vice Mayor Roger Gallaway, who previously served on the board, spoke favorably of his experience and involvement with the Sidney Housing Authority.

"It's fairly simple. For the most part they're going through their financials, profit and loss statements, things like that. They will listen to some grievances, if they're brought forward in the right manner, from residents," said Gallaway. "Basically, you're working with the Scottsbluff Housing Authority, who manages our housing authority. When I was on it, we had proceeded with building the Canterbury Estates project because our housing authority has done a very good job and is operating in the black. They went ahead with that project and immediately filled all of the housing units from that."

Canterbury Estates, which officially opened in February 2020, was built specifically for occupants with special needs and is located on Canterbury Lane. The project cost approximately $2 million with federal funding administered through the State of Nebraska.

Sioux Villa offers units ranging from one to four bedrooms and has no income restrictions and tenants pay utilities. Rent at Western Heritage is income based with utilities included and some units free of income restrictions. According to Gallaway, when he was on the housing authority board, there had been plans to redevelop the Sioux Villa apartments.

"Ultimately, they know you can only fix-up the old barracks buildings so much. They had the beginnings of a good plan but they're just in the process of trying to seek out more federal grants and some funding opportunities with the different organizations that they can work through to get that project going," said Gallaway. "It's a very, very worthwhile organization and has done an extremely good job of representing the community and the housing authority."

The biggest deterrent from council members serving on the board appeared to be the meeting times. While the Housing Authority Board meets on a quarterly basis-alternating between the Sioux Villa and Western Heritage apartments-the meetings are held at noon.

The next meeting of the Sidney City Council will be at 7 p.m. on January 24 at Sidney City Hall.