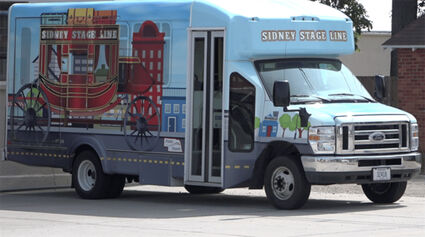 Sidney's Public transportation department will be adding a minivan to its fleet which currently includes the 12-passenger bus, pictured above.

The Sidney City Council approved expenditures for two different vehicles during their January 10 meeting. One will help reduce costs for the public transportation department while the other will increase productivity for the electric department.

The public transportation department will be adding a minivan to its fleet, which consists of two 12-passenger buses. According to Public Transportation Director Kasey Kantor, operations of "Handi-Ride", Sidney's public transportation, have remained changed since 2020 and the COVID pandemic. In the past, the department operated in a stageline model, picking up passengers at designated stops along a route.

Now, said Kantor, the department operates more on a curb-to-curb and one-on-one basis. Kantor told the governing body he was requesting to purchase a minivan to better facilitate the new model of transportation and lower fuel and maintenance costs. An example cited by Kantor was the use of one of the 12-passenger buses to take just one person to WalMart, which is four miles from downtown Sidney. The minivan, said Kantor, would reduce fuel costs for even such short trips.

"There's also some more opportunities because, at times, there's calls to take people outside of town or to appointments outside of Sidney," said Vice Mayor Roger Gallaway. "Some of the programs that we're getting involved with, there's opportunities to potentially profit and make some money. It'd be more profitable with this type of vehicle"

According to Kantor, the minivan is handicap accessible and so meets requirements for the Americans with Disabilities Act (ADA). Additionally, due to grants, the City would only need to pay $6,500 or 10 percent of the cost of the vehicle and the department had approximately $12,000 in reserves. While many vehicles are at least a year out from order to delivery, Kantor said if the minivan became available earlier than there would be funds for the purchase.

Other opportunities to increase the efficiency of the department and reduce costs were also given by Kantor.

"We have two buses with over 100,000 miles. By state (statute) we can auction those off at any time," said Kantor. "We have one that's a 2010 that will probably go up for auction the next time we have one. So, we still have around four vehicles but this one will help us out in many different ways."

Kantor said the purchase of the minivan was just "one step in moving forward to do more."

The public transportation busses operate Monday through Friday from 8:00 am to 5 pm, with the exception of holidays. Rates are $1.50 per one-way trip for all areas within the City limits. Prepaid punch cards are available at a price of $15.00 for 11 rides. To reserve a trip on Handi-Ride, call 308-254-7070 M-F, 8am-5pm, holidays excluded.

The other purchase approved by the Sidney City Council was for a mini-excavator for the Sidney Electric Department. According to Superintendent Michael Palmer, he had received two bids; one was $40,185 for a Caterpillar (CAT) mini-excavator while the other was $30,251 for a Bobcat mini-excavator.

With both machines being similar, according to Palmer, he requested permission to purchase the Bobcat for nearly $10,000 less than the CAT. Palmer said the mini-excavator would be helpful for projects in tight spaces where the City's backhoe couldn't fit. Additionally, while the City of Sidney had one mini-excavator already, work on one job would pause while waiting for the machine to finish on another job.

The Sidney City Council approved the purchase of the Bobcat mini-excavator unanimously.

The next meeting of the Sidney City Council will be at 7 p.m. on January 24 at Sidney City Hall.