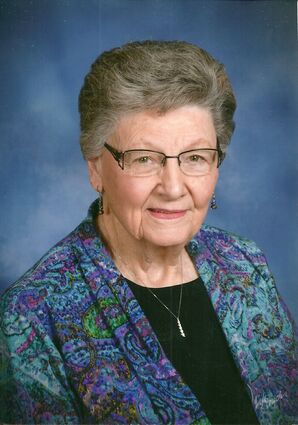 Eloise Eileen Ellis Wilson, 94, of Loveland, CO and a longtime Sidney, NE resident, passed away Sunday, January 8, 2023, in her home at Lakeview Commons with her family by her side.

Eloise was born the eldest of 3 children to Harley and Lois (Pool) Ellis on January 31, 1928, in Dalton, NE. Growing up in the Dalton, Bridgeport and Broadwater NE area, Eloise graduated from Bridgeport High School in 1945, where she received normal training and taught in the country schools.

Eloise married Lewis (Lew) Wilson on June 1, 1947. Three children were born to this union, Sharon, Connie and Craig. After farming the first year of marriage, they moved to Grand Island, NE where Lew finished business school and daughter Sharon was born. Connie and Craig were born after they moved to Sidney, NE in 1951, where she was devoted to raising her family. Eloise joined Light Memorial Presbyterian Church in 1952 and taught Sunday School for many years. Eloise was a member of Beta Sigma Phi Sorority, King's Daughters, Extension Club, and a Bridge group. She sewed clothes for the girls, raised gardens and preserved the produce. Eloise and Lew took their children on summer vacations, traveled to 49 states and 11 European countries, and enjoyed a lake home on Lake McConaughy, Ogallala, NE.

Eloise taught school before marriage then devoted herself to raising her family. After her children were grown, she worked for Sidney podiatrist, Dr. Daniel Garcia for 20 years. Her life was shaped by hard work and love of family.

Retirement in 1988 took Eloise and Lew to Silveridge RV Resort in Mesa, AZ, where they spent winters for 30 years. Eloise made treasured pieces of ceramics, woven afghans, hardanger, and jewelry; she participated in card groups, learned Mahjong, and was an active member of the Singles Group. Lew passed away in 2010 a few days shy of their 67th Anniversary. Eloise continued to winter there until her stroke in December 2019.

Eloise and Lew moved to Loveland, CO in 1997 to be near their daughter, Connie, and son, Craig and their families. Eloise was devoted to her family, had genuine interest in their lives, remembered birthdays, attended graduations and weddings and special events in each life. The family gathered in Loveland in 2017 to celebrate her 90th Birthday.

The last three years of Eloise's life began with Covid lockdown in an assisted living facility. Unable to socialize and participate in activities isolated her. Loss of independence and abilities made these last years a difficult struggle. However, her keen mind was intact until the end. Eloise was grateful family and dear friends did all they could to boost her spirits.

Eloise eagerly anticipates joyful reunions with those who have preceded her in death: sister Bonnie, parents, husband Lew, daughter Connie, grandson Devin, brother and sister-in-law Jack and Helen Ellis, and all those souls before.