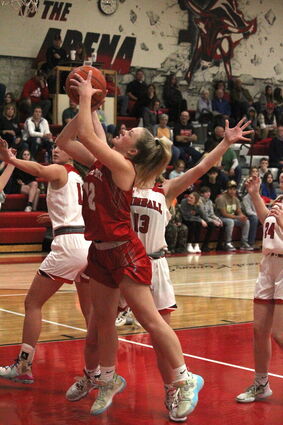 Potter-Dix junior Madison Williamson drives and puts up a layup during the Lady Coyotes' win over Kimball last Tuesday.

A week that started with a big win for the Lady Coyotes ended with three straight losses and a first-round defeat in the MAC Tournament on Monday, dropping the Lady Coyotes to 3-and-8 on the season. On Tuesday, January 10, the Potter-Dix girls traveled to Kimball to match up against a struggling 1-and-9 Lady Longhorns team. Play started with both teams struggling to score, as their defenses thwarted any rhythm for either team. Turnovers ended most possessions, with neither team protecting the ball, and throwing errant passes trying to move down court. The low-scoring first quarter ended with Potter-Dix holding an 8-to-7 advantage. Both teams played a little sharper in the second period, with Kimball pulling ahead early in the quarter with two three-point hits by freshman Addison Olson. Potter-Dix continued to turn the ball over and misfire offensively. As the half wore down, Potter-Dix junior Madison Williamson knocked down a three-point shot followed by a field goal by senior Tyenne Berner to give Potter-Dix an 18-to-17 lead with two minutes left. The Lady Coyotes went up by three, 20-to-17 at the half.

Both teams were victimized by sloppy play and turnovers throughout the contest, but Potter-Dix started to increase their lead in the third quarter. Kimball relied on their players passing the ball to their tall girls, Addison Olson and Grace Anderson, in the paint and trying for close shots and rebounds. But Potter-Dix did a great job on defense inside, and the Lady Coyotes took a 32-to-22 lead into the fourth quarter. Potter-Dix then increased their lead and shut down the Kimball offense in the fourth period, taking the win by a final score of 39-to-28. Senior Lily Tabor led the scoring for Potter-Dix with 16 points in the victory. Addison Olson led the Lady Longhorns with 11 points.

The Lady Coyotes then traveled to Leyton for a game against the Lady Warriors, and although they hung close in the beginning of the game, the smooth and patient passing and fast break offense of the Lady Warriors opened a big lead and put the Lady Coyotes away, 51-to-21. Williamson led the Lady Coyotes with 7 points in the loss. Potter-Dix then hosted a tough Hay Springs Lady Hawks team, and fell behind early, then narrowed the lead in the second quarter, but still trailed 35-to-20 at the half. Potter-Dix played better defense in the second half and were able to start to chip away at the Hay Springs lead, but the Lady Hawks rallied back in the fourth quarter to put away the Lady Coyotes by a final score of 57-to-42. Williamson again led the scoring for Potter-Dix with 12 points.

Potter-Dix entered the MAC Tournament as the number 5 seed, drawing number 4 seed Garden County in the first round of the tournament. A disastrous second quarter and lack of offense from the Lady Coyotes in the second half sealed the six-point victory for Garden County, 33-to-27. Williamson again led Potter-Dix with 13 points in the loss.