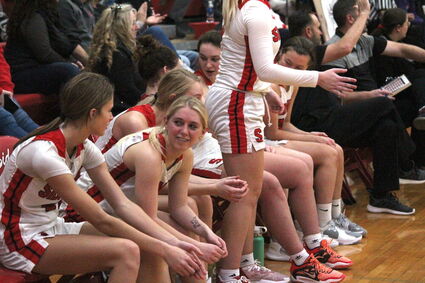 Karsyn Leeling, Rheagan Stanley and the Sidney starters relax while the substitutes take over during recent action. The Lady Raiders' strong performances have given the bench players valuable playing minutes and experience that will benefit the team down the stretch and in post-season play.

Sidney's Lady Raider Basketball team continued their strong play over the past week, taking down Mitchell and North Platte on the road and Ogallala at home. The three wins improved the team's record to 12-and-1 on the season, and highlighted their lock-down defense and fast and patient offense.

The Lady Raiders had already beaten the Mitchell Lady Tigers by a wide margin in Sidney back on December 29 during the Holiday Tournament, and their next meeting was very similar, even down to the score being within one point of the first meeting. On Tuesday, January 10, the Lady Raiders travelled to Mitchell, and promptly started the game with an offensive burst, scoring 21 points in the first quarter while holding down the Lady Tigers to just 6 points. The Lady Raiders tacked on another 11 points in the second quarter and again held Mitchell to 6, taking a 32-to-12 lead into the half.

Sidney continued their strong play in the second half, easily outscoring the Lady Tigers 28-to-7 to take a 60-to-19 victory, a one-point difference from their December 29 meeting that ended in a 61-to-19 win for Sidney. Every Lady Raider scored in the contest, led by seniors Rheagan Stanley and Reese Riddle with 13 points each.

On Friday, the Lady Raiders next hosted Ogallala, and the Lady Raiders again had a fast start, bolting out to a 9-to-0 lead early. Sidney's defense forced turnovers early and often, and built up a 13 point lead at the halftime break, 33-to-20. Sidney junior Karsyn Leeling was injured colliding with Ogallala's Laney Caskey while scrambling for a loose ball, and had to be carried off the court and taken for an examination. Sidney took over in the second half, shutting down the Lady Indians' offense, holding them to single digits in each of the final quarters while putting up 32 points in the half to seal the win for the Lady Raiders at 65-to-35. Riddle again led the scoring for Sidney with 13 points while junior Payton Schrotberger also pitched in 13 points in the victory.

On Saturday afternoon, Sidney traveled to North Platte for a matchup against a Lady Bulldog team that had struggled so far this season, with only 2 wins against 11 losses. Sidney had to lean on their defense, as the Lady Bulldogs' pressure defense gave Sidney trouble and forced a whopping 25 turnovers in the contest. They also had to play without junior offensive powerhouse Karsyn Leeling due to injury from the Ogallala contest the day before. The game was close early on, with North Platte taking a one point lead late in the first quarter, then tying the game up about halfway through the second period. But the Lady Raiders kept working, and started to pull away with their good shooting and patient offense. Sidney built a 25-to-19 lead at the halftime intermission, then opened the third quarter with a 7-to-2 run to put the Lady Bulldogs in the rear view mirror. Sidney continued to score effectively into the fourth quarter, then knocked down six of eight free throw attempts down the stretch to seal the win at 55-to-40. Junior Katie Ramsey led the scoring for Sidney with 12 points of 5-for-7 shooting while Schrotberger had an outstanding game, scoring 10 points and pulling down 10 rebounds for a double-double.

Next the Lady Raiders travel on Friday for a matchup against the 11-and-1 Gothenburg Lady Swedes.