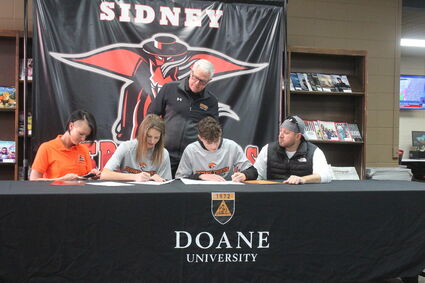 Karsyn and Cameron Leeling are flanked by parents Amanda Sharman and Chad Sharman, while Doane University Head Coach Ed Fye looks on as the brother and sister sign their commitment letters to attend Doane University.

Doane University Track and Field Head Coach Ed Fye's work scouting in the Sidney area paid off with the signing of letters of commitment from two of the areas' most outstanding athletes, Sidney High School senior Cameron Leeling and his sister, junior Karsyn Leeling. A big turnout made up of coaches, staff, students, relatives and number one fan Pam Vecchiarelli congratulated the pair for their accomplishment. Both of the Leelings are on full scholarships.

The Leelings are both top-notch multi sport athletes, and while Cameron while compete on the Track & Field team, his sister Karsyn will play Volleyball and Track and Field when she graduates from Sidney High School next year.

Both Leelings commented on how much the loved the facilities at Doane and how Coach Fye had encouraged them in their efforts for a long time, talking with them at meets and when the brother and sister would travel to competitions.

Cameron noted he really liked the campus and felt at home. Karsyn noted that she loved the campus, and it would be great to have her big brother there to help her adjust and acclimate to college life. The brother and sister said they did not so much compete with each other growing up, but rooted for each other. Karsyn noted that when she started High Jumping at Sidney high School, there were no girl competitors, so she practiced with the boys. She credited her brother, Jacob Dowse and Sawyer Dickman for helping her be able to clear the heights she does in meets. While Cameron was unsure of his future plans, Karysn said she wanted to work in the Real Estate industry.