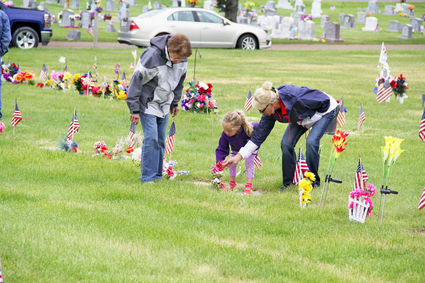 A grandmother and great-grandmother show the next generation the importance of decorating the graves of the fallen at Greenwood Cemetery Monday'. Young and old attended the Memorial Day service to honor those who died in the service of their country.

"We can't bring them back, but we can honor their sacrifice," said John Sanna, Disrict 4 American Legion Commander during his address to Sidney's Memorial Day audience Monday.

Sanna used the story of Major Brent Taylor of Ogden, Utah as an example of the typical soldier who died for his country. Taylor, on his third deployment, was killed in Afghanistan as he served in the U.S. Army. Taylor, like many veterans, said Sanna, served by choice. Prior to leaving for what proved to be his last assignment, friends told Major Taylor he had done enough, imploring him to let others serve that time around.

But Taylor insisted on fulfilling the mission of his country, believing that a united corps of soldiers could make a difference in that far away land.

Taylor's death made him one of more than 1 million people to die in service to their country. Hence the reason for Monday's gathering - "to honor our fallen heros."

Monday's welcome was delivered by Les Larson, commander of American Legion Post No. 17, followed by a prayer by Ted Bourret, pastor of St. Paul's Lutheran Church. Martha Gibbs of Sidney sang the "Star Spangled Banner," and later a rendition of "God Bless the U.S.A."

Following the Laying of the Wreath by the Legion Auxilliary's Bonita Dickinson, a firing squad salute was presented.

About 100 people turned out for the Sidney service.