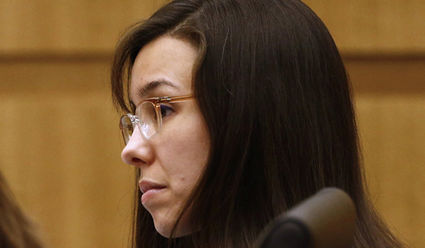 Defendant Jodi Arias listens to prosecutor Juan Martinez makes his closing arguments during her trial at Maricopa County Superior Court in Phoenix on Thursday, May 2, 2013. Arias is charged with first-degree murder in the stabbing and shooting death of Travis Alexander, 30, in his suburban Phoenix home in June 2008.

PHOENIX (AP) — A lawyer for Jodi Arias began his closing argument Friday by imploring jurors to take an impartial view of the case and his client — even if they don’t like her.

Arias smiled broadly when defense lawyer Kirk Nurmi told the jury: “It’s not about whether or not you like Jodi Arias. Nine days out of 10, I don’t like Jodi Arias. ... But that doesn’t matter.”

Arias said she killed Travis Alexander in self-defense, but prosecutors say it was an act of first-degree murder that could bring the death penalty. Arias hopes the jury, at the most, convicts her of second-de...