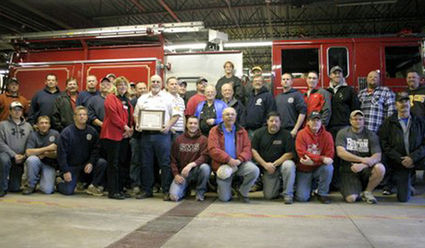 The Cheyenne County Chamber of Commerce created a new award in 2012, “Heroes Among Us.”

This year’s recipients are all of the area fire departments because of the hard work that they did while they were fighting the wildfires in 2012 that burned nearly 6000 acres in Cheyenne, Kimball and Banner Counties.

Wanda Brogren, of the Cheyenne County Chamber of Commerce, was on hand to present the award to the Sidney Volunteer Fire Department on May 2.

Before presenting Chief Keith Stone, she said a few words. “What makes a hero? It is not something planned. A hero does not wake up one morning and decide they are going to do something heroic. A hero has a circumstance thrust upon them. And at that moment, without thinking, they are willing to do what it takes even if they sacrifice their time, their income, their personal life and sometimes their health and even their lives. A hero is not a fictional character, heroes are our friends, neighbors and strangers, who without our knowing it, will come to our aid no matter the cost to themselves.”

Brogren stated that one of the largest fires of 2012 that the departments had to battle was the tri-county fire that started on a Thursday night when a lightning strike ignited a tree and the fire eventually spread to almost 6000 acres. The following Sunday, winds were 25 to 30 miles per hour and temperatures were around 100 degrees. The combined efforts of the fire departments and land owners helped to save livestock and a wheat field.

Brogren added that the fire fighters are not paid, this is not a job that they have to do; this is a commitment that they have chosen to do. The residents of the County of Cheyenne appreciate all the hard work that the volunteer fire departments do.