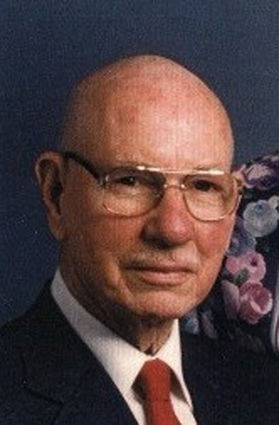 Galen Arthur Thomason died peacefully on Nov. 24, 2014 in a Fort Collins care facility surrounded by his family. He was born in Baileyville, Kan. on Oct. 9, 1919, and 18 months later his family moved to a farm north of Stratton, Colo. He was a multi-sport athlete and graduated from Stratton High School in 1937. Mr. Thomason joined the Army Air Corps in May 1940 and served in Europe during World War II. He also served during the Korean and Vietnam wars, and was especially proud of his service during the Berlin Airlift in Fassberg, Germany. During the Cuban missile crisis, one of his duties was briefing Vice President Lyndon Johnson. He retired from the Air Force in 1968 with numerous commendations and awards.

During World War II, while stationed at Lowry Field (Denver), he met Eva Lenzen of Sidney, a Registered Nurse at St. Joseph's Hospital. They married in 1945 at St. Patrick's Catholic Church in Sidney, and began a long, happy, and well-traveled life. They lived in many states and Japan, and continued overseas travel well into retirement. He was a talented and versatile father, ensuring his children knew all the rudiments of ice skating, sledding, bicycles, modeling building, pogo sticks, and hula hoops. He was a talented artist with a professional understanding of the body's proportionality such as that used by Da Vinci.

While in the Air Force, Mr. Thomason mastered the art of fencing, eventually establishing (and was captain of) the Lowry Field fencing team. He subsequently competed in the U. S. Amateur Athletic Union (AAU), participated in the 1948 U. S. Olympic fencing trials in Chicago, and in the 1960s was the sabre champion of the Pacific Air Force (PACAF).

He earned a B. A. degree in education (University of Nebraska, Omaha), B. S. in business administration and finance (Colorado State University, Fort Collins), and a Master's degree in guidance and counseling (Adams State University). After retiring from the military, Mr. Thomason was a vocational rehabilitation counselor for the state of Colorado for 20 years, serving in Denver, Grand Junction, Alamosa, and Buena Vista, and was also a licensed emergency medical technician (EMT). He returned to Fort Collins in 1988, where he was active in local university extension classes and was president of his regional home-owners association. He never stopped learning, was an active follower of politics and avid traveler and reader, and kept physically active until this month. He was a member of the Knights of Columbus, American Legion, CSU Alumni Association, and the Berlin Airlift Veterans Association.

Mr. Thomason was a man of honor and integrity. He was an outstanding father and friend, contributing to his church and community, and will be greatly missed by all who knew him.

In the last years of his life, Mr. Thomason lived as comfortably as he did due to the unwavering love and care he received from his Home Instead caregivers and the loving staffs of Poudre Valley Hospital, Columbine West, and Home Instead. In lieu of flowers, the family requests donations be sent to the Air Force Aid Society, Wounded Warrior Project or the Measles and Rubella Initiative (sponsored by UNICEF, the Red Cross, and the CDC http://www.measlerubellainitiative.org), or Hospice of Fort Collins.