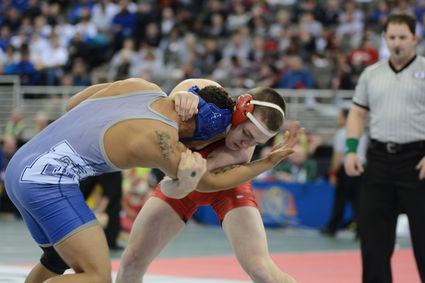 Shelly Peckham / Special To The Sun-Telegraph

Sidney High freshman Derek Robb won both of his matches on Thursday by pin and will compete in the state semifinals later on Friday afternoon.

"He came right after you, didn't he," said Sidney High School wrestling' head coach John Ganser to freshman Kaden Vowers after his opening round win.

"He really did," replied the young, 106-pound Red Raider wrestler after his state debut.

"They all come after you here," said Ganser concluding the lesson.

OMAHA – With two wins on the opening day of the 2015 Nebraska State Wrestling Championships, Sidney High's Derek Robb is halfway to a state championship. But it only gets tougher from here.

While Robb upped his season record to 43-0 after two wins at 138 pounds, the three other Raiders'...