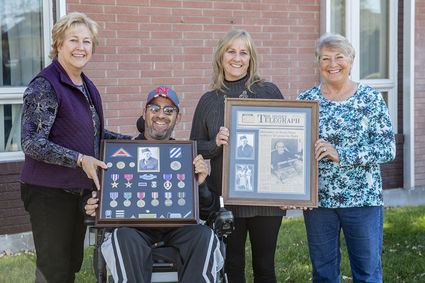 Bahr's children pose for a portrait with his medals and a past newspaper story about his military career. From left, Jo Houser, John Bahr, Lori Borchert and Donna Bahr.

john W. Bahr found work in Hawaii in late 1941. After the horrific bombing of Pearl Harbor, he was employed as a civilian working to repair the damage to the piers and docks that were destroyed as a result of the blasts by the Japanese torpedoes and bombs. Soon after the attack, John made a life-changing decision to re...

Larry, thank you so much for writing my dad's story. It was told in amazing detail. Ryan, thank you for taking the time out of your day to photograph my dad's medals and previous article. His story brings tears to my eyes when I think of the actions he took to preserve our freedom. He was a true hero.