Applications can be submitted now 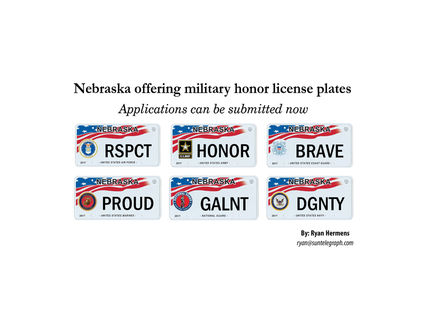 The state of Nebraska is rolling out new license plates in January to honor veterans and activity duty members of the U.S. Armed Forces.

Applications for the plates are available at county treasure's offices throughout the state or on the Nebraska Department of Motor Vehicles website.

"It is for any veteran or anyone serving in the armed forces," Cheyenne County Treasurer Diane Scott said.

License plates are available for the Army, Air Force, Coast Guard, Marines, National Guard and Navy. Each design has the emblem or logo of the branch displayed prominently on the plate.