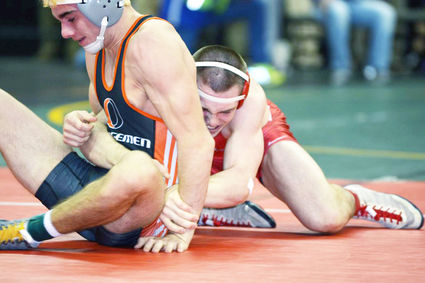 Shelly Peckham / For The Sun-Telegraph

Sidney's Derek Robb, right, has ahold of Jacob Pinkerton of Beatrice in Thursday's quarterfinal match in the 152 weight class at the state tournament in Omaha. Both Robb and Trey Arellano (106) advanced to the semifinals.

A pair of Sidney wrestlers are headed to the semifinals of the Class B Nebraska state wrestling tournament in Omaha.

Trey Arellano (106) and Derek Robb (152) advanced to the semifinals of the state tournament, while Kaden Vowers (113) and Cody Hofrock (220) fell to the consolation rounds.

Arellano, a freshman, opened the tournament Thursday morning with a win by fall in 4:44 over Jarrett Cline of Mount Michael Benedictine. He kept his record unbeaten and moved to 44-0 on the season with a win over Chase Larsen of Plattsmouth in the quarterfinals. Arellano topped Larsen in a 7-4 decision.

Robb kept his unbeaten streak at the state tournament alive on Thursday. The sophomore, who won state in the 138 weight class last year, opened this year's tournament with a win by fall in 1:45 over Jean-Marie Djidjoho of Mount Michael Benedictine in the 152 weight class. Robb then dispatched Jacob Pinkerton of Beatrice by fall in 1:51 in the quarterfinals.

Kaden Vowers, a sophomore, opened with a win by fall in 3:45 over Trason Snover of Steward in the 113 weight class. In the quarterfinals, Vowers fell to Andrew Nielsen of Plattsmouth in a 19-6 major decision.

Cody Hofrock, a senior, lost his opening bout on Thursday in the 220 weight class, falling to Wyatt Gutzmer of Columbus Scotus by fall in 4:00.