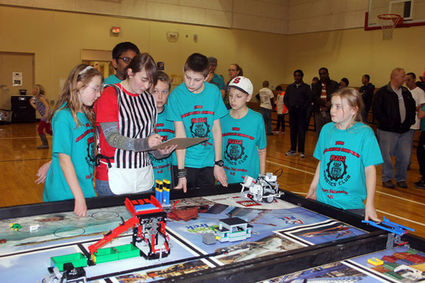 Grace Payton,Gowraz Ghatananeni, Ty Grunig, Jonathan Spachek, Carter Ost and Grace Bowcut of the Cheybots 4-H robotics team crowd around First Lego League referee Rebecca Whitham as she reviews the scores earned by their robot during the first round of competition at the Sidney Regional Qualifying Tournament held at West Elementary in January.

This summer, the Cheyenne County 4-H will be expanding its First Lego League robotics program with activities for children and young adults from kindergarten all the way through 12th grade.

"It's for anybody who's interested in robotics and tech, and who want to play around with that sort of thing," Nebraska Extension Educator Cynthia Gill said. "They are learning to program and to code."

First Lego League challenges youth to design, build and program a robot using Lego Mindstorms technology, and then compete with other teams on a tabletop area to solve a specified problem.