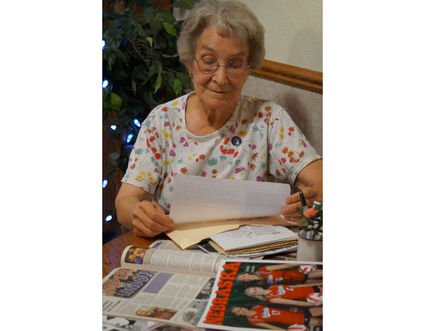 Mabel Nelson of Sidney looks through the newspaper and magazine clippings she has collected over the years about her grand-niece Jordan Larson. Larson competed on Team USA's Woman's Volleyball team who recently won a bronze medal in the 2016 Rio De Janeiro Olympic Games.

Mable Nelson has been following the Olympic games for a more personal reason then most of Cheyenne County, Nelson has been cheering on not only Team USA in Volleyball but also her Grand-niece.

Surrounded by paper clippings from various newspapers and magazines, Sidney resident, Nelson sat to talk about her grand-niece Jordan Larson.

Larson just competed as a member of USA's Woman's Volleyball Team in the 2016 Olympic games that were held in Rio de Janeiro, August 5-21.