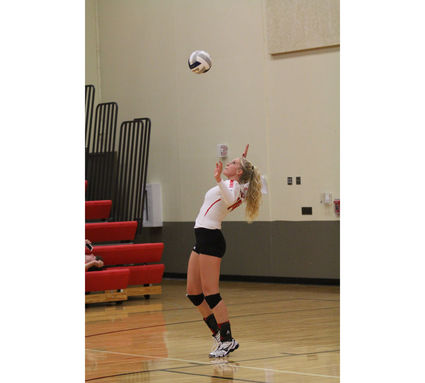 Sidney's Annalise Lecher has a simple but effective serve, which she used with 100 percent efficiency in the Twin City Tournament. Her play earned all-tournament recognition.

Annalise Lecher has been named to the all-tournament team for play in the Twin-City Volleyball Tournament.

Lecher, Sidney's 5'-10" middle hitter, who has started on varsity four years for the Lady Raiders, continued to anchor the team through the tournament. Sidney finished seventh in the tournament, but Lecher's play caught the eye of tournament officials.

Lecher averaged 5.5 kills per game, notching 14 against Cheyenne (Wyo.) Central. From the service line, she was perfect throughout the tournament, while serving 16 points with five aces. On defense, Lecher had 11 blocks.