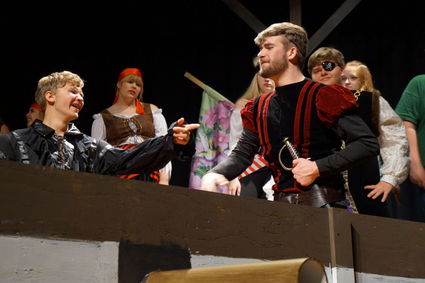 Sidney High School students gear up with dress rehearsal in preparation for their musical "A Pirates Life for Me." The musical will open Friday night with a show on Saturday and a Matinee Sunday. Pictured from left are Thomas Webb and Yeager Price.

Sidney High School students will spend the week in dress rehearsal gearing up for Friday's opening of this year's musical "A Pirate's Life for Me."

In this swashbuckling tale a regular guy, Rodger Goodman, embarks on a quest to become the pirate Blood Beard to win the affections of a pirate queen.

SHS Senior Abbie Frass plays Sarah, the Pirate Queen. Frass says her charterer resembles that of the one Keira Knightly plays in the "Pirates of the Caribbean" movie.

"She was raised in a nice mansion, but chose to go out and find a pirate king and live a life of crime," Frass said.