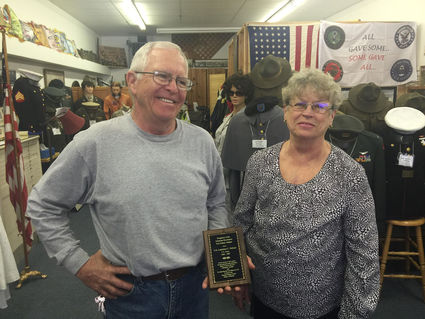 The Fort Sidney Chapter of the Daughters of the American Revolution honored Col. Lawrence C. Nelson, retired, for his service to Cheyenne County at the Veterans History Museum Saturday. With Nelson, left, is Fort Sidney Chapter D.A.R. President Sharon Fehringer.

Col. Lawrence C. Nelson (Ret.) was honored Saturday by the Fort Sidney Chapter of the Daughters of the American Revolution. Nelson is a retired veteran, having served in the United States Army from 1968 to 2007.

Nelson was recognized for his service to his country, his numerous and continuous efforts to honor and serve Nebraska's veterans, and for allowing the Fort Sidney D.A.R. to meet at the Veterans History Center, located in downtown Sidney. Nelson owns and operates the museum, opening it to the public for education on veteran history.